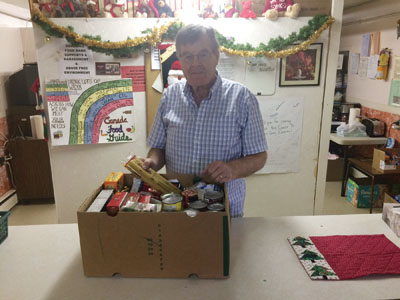 Each and every year the situation seems more dire but this year food banks across Canada need your help, especially locally at the Coaldale Food Bank.
Vaughn Caldwell, from the food bank, said the demand in Coaldale is up about 25 per cent from last year.
“It looks like the Christmas season will be serving about 125 families. That’s up a bit from last year,” he said.
The food bank is looking for sponsors to either sponsor a family by coming to the food bank and to donate $150 and the food bank makes up the hamper and it is delivered or sponsors can fully sponsor families.
“That’s where they go out and get the family’s information and then go out and purchase everything that goes into the hamper and then deliver to the food bank and we drop it off,” Caldwell explained.
According to Caldwell, the food bank hasn’t increased a price of a hamper sponsorship for years.
“We like to keep it affordable. We get food donations and stuff. If we’re short $150, we just add it on and make the hamper up at the food bank, so it’s substantial for the family,” he noted.
During the Christmas season, the Coaldale Food Bank is open Monday through Friday from 9:30 a.m. to 5 p.m. The new hours are now in effect.
“That accommodates people to come in and get their families or for clients to come in and register and also for people that want to make a donation towards the Christmas season. That’s why we’re open that extra time,” he said.
This past year has been challenging, Caldwell said. “To keep up with things. Our food donations on both of our food drives in the spring and fall food drive were down about 30-40 per cent. Therefore, we’ve had to go out and buy a lot more food, than we normally do.”
“That’s been a challenge but we’ve seemed to overcome it with donations that have come in. We just do what we have to do to keep things going,” he said.
Caldwell added a lot of the other food banks throughout the area including Taber are very dependent on the oil industry and with layoffs and everything else their demand for the food bank is almost 100 per cent.
“Calgary has a huge dependence on food banks,” he said, with the downturn in the economy across the province.
Caldwell said there’s no light at the end of the tunnel because pretty soon the province will see more taxes in the New Year on utilities and with the soon-to-be implemented carbon tax.
“That’s really going to affect the price of food and everything. 2017 is going to be a very interesting year to see how the food banks in Alberta survive,” he said.
Out of the 120 families served during the holidays, Caldwell said, about 30 of those families will be fully sponsored, where the sponsor buys everything.
“The rest we’ll be using the donation we get from the $150 making that up and it all comes out of our supplies if not,” he said.
“There will probably be some of them, we totally make up — the whole hamper for a family because we usually don’t get enough sponsors to cover everything,” he added.
The food bank will start delivering Christmas hampers on Dec. 12. “We try to get them out within 10 days, and get everything cleaned up,” he said. One good thing though is the food bank has enough volunteers to help out this holiday season.
“If we need extra people, we can call on some of the food bank clients,” he said, adding it’s a good way for clients to give back. “And, a lot of them do.”
Caldwell would like to thank the community for all the support.
“We’re looking for sponsorship for families and also for cash donations for operating our food bank for the balance of the year and all 2017. Most of our operating money we use comes in at Christmas time and we budget ourselves and it has to last for the whole year until the next donations come in next Christmas,” he added.