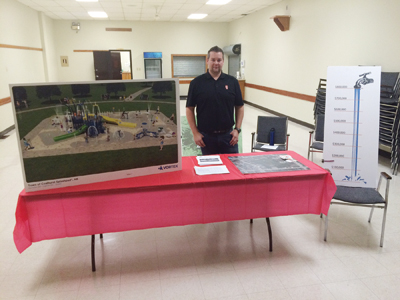 Some day soon Coalhurst kids will have a place to splash and play and cool off on a hot summer southern Alberta afternoon.
A spray park in Coalhurst may become a reality, sooner than later, with the help of the Coalhurst Parks and Recreation Society and the town.
“The town said we would like a committee started and we would like some people to look into it — What can we do? Where can we put it? How we could do it?” said John Guliker, society chair.
According to Guliker, there are six volunteers on the committee thus far.
“There was about 10 of us that started the committee but four dropped off and now the six of us have put this together, as far as we’ve gone,” he said.
Guliker was at an open house for the project at the Community Centre during this year’s Coalhurst Christmas Craft Sale.
Guliker said the town and the society looked at locations throughout the community best suited for a spray park.
“The town has given us the go ahead with Imperial Meadows,” he said, adding the slated place is located at the east end of Coalhurst — closest to where kids are in the community.
“The relation to it from the schools, from the Community Centre and from where the most children are, that’s why we went with that area,” Guliker added.
It was about a year ago, Guliker explained, the town asked the society to pursue the spray park idea and now the society is at the point it is ready to secure donations through fundraising initiatives.
“We’re going to start asking businesses in Coalhurst. We’re going to start in the Town of Coalhurst and get our support from here and then broaden it out and about. That has been our biggest thing — trying to find the donations, here in town,” he noted.
Other communities are in the process or have adopted the recreational model of developing a spray park, rather than a recreational complex or swimming pool or arena — as many communities have noted it is more cost-effective and requires less upkeep and operation budgets. The Town of Picture Butte is in the process of developing a spray park and the Village of Nobleford has one in operation.
Prior to the society being involved in the spray park project, Guliker said, the town discussed what it wanted to do, which included the notion of building a recreational facility or pool.
“It turned out, we would be better off if we were to do a spray park. It was cheaper. We’re looking at $800,000 to get it from the ground and up, installed, and running,” he said.
Guliker added the town will incorporate a spray park, as part of its maintenance crew’s duties.
“We went with the recirc-system, where there’s very little maintenance,” he said. The town would inspect the site every morning to clean up any messes, check for glass and other aspects of lightly maintaining a public recreational spot.
Volunteers are also needed to help out the society with the dream of building a spray park for Coalhurst and area kids.