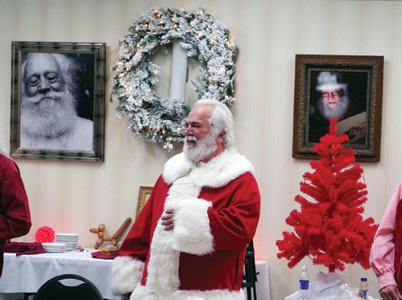 Traditionally, and thanks to Clement C. Moore’s poem “A Visit from St. Nicholas” or “’Twas the Night Before Christmas” — Santa Claus was described as dressed all in fur, his eyes twinkled and his dimples were merry, his cheeks were compared to roses and his nose to a cherry. Of course, the beloved poem described the jolly old elf as having a beard as white as the snow and he had a round belly that shook when he laughed like a bowlful of jelly.
Poems and giant soda pop makers aside, Santa has also had some questionable representation over the years with Billy Bob Thornton’s “Bad Santa,” Mr. Lahey’s Trailer Park Boys rendition and Homer Simpson’s attempt at Santa training to learn reindeer names and how to “ho ho ho” for a part-time mall Santa gig.
In the real world, Santa has become an integral part of holiday festivities across the globe. Kids can’t wait to visit Santa or his helpers prior to Christmas Eve to chat about whether the kids have been naughty or nice and receive their almost habitual candy cane and seasonal picture to mark the annual pilgrimage to the local mall or community event. But, for the best of the best of Santas, there’s Santa School in Calgary via the North Pole, which trains participants from all around the world including celebrities such as Canadian actor John Dunsworth who plays Mr. Lahey on the Trailer Park Boys, which was resurrected recently on Netflix.
“We train Santas, but what we need to do in order to have a real ‘well-rounded’ Santa is they need to walk, talk, look and smell like the part,” said Jennifer Andrews, dean of Santa School.
According to Andrews, Santa School has been around as long as Santa has been around.
“He always has required to have regional representatives when he can’t be everywhere,” she added.
Not only does Santa School train top-notch professional Santas, the school also makes custom suits for Santa and many other merry-making extras.
“We have an elf workshop that does that. We make all sorts of custom accessories for Santa. Anything from a mail bag, to bells to belt bells to belts and belt buckles and boot bells — you name it, we make it,” she joked. “Anything to do with Santa.”
Andrews noted the school also book out Santas for events in Calgary, surrounding area and abroad.
“Santa can’t be everywhere all the time. When he can’t be everywhere all the time, we have people that stay in his place, who can be his best version of him. And that’s our regional representative we train at the school,” she explained, adding the school also does custom and corporate decorating related to holiday events or activities.
Santa School, Andrews said, has outgrown its original office and now training is held at larger venues including convention centres.
“Where we can have the Santas move around. Our course is very interactive. We need lots of room for Santa to be able to come in and work a room,” she explained. “Santas aren’t small. When you get 30 people in a room, it gets cramped very fast,” she said.
Initially, Andrews added, Santa training is only three days but the facility offers mentorship throughout the year.
“We have a lot of Santas that will come back year after year in order to further hone their skills,” she said.
Even though the latest batch of Santas have come and gone, after completing training in October, participants have visited the training facility from across Canada, the United States and from all over the world.
“I have Santas who have come from Africa, Denmark, Sweden, all over the United Kingdom, and Asia.”
Andrews said there has even been a Santa who registered for the school’s next session from Jerusalem.
“He actually enters venues on a camel,” she noted, adding not only do participants come from all over the world, professionally-trained Santas are also sent all over the world including locations such as Asia and the United Kingdom.
Andrews added anyone, anywhere can also get a custom Santa suit made.
“We also sell a manual — ‘The Manual of Bringing Joy,’” she noted, which is all about being Santa and the manual is available online.
Many times over the years people have mentioned to Andrews they can’t believe there’s actually a Santa School.
“I always say, anything you want done well, should be done purposefully,” she said.
“Santa School is done with the intention of making something excellent and that’s making these Santas excellent. I like our Santas to be individuals. I like them to be more like snowflakes and less like cookie-cutter Santas. But, I want them to figure out who Santa is to them and then to do it really well and to practice it really well and to continue that learning process,” she noted.
Santa School, Andrews said, feels passionately about making sure their Santas are trained professionals.
“I feel like any person I put in my child’s path, I want them to be professional. Whether it’s a coach or a teacher or an instructor or a tutor. Whomever it is, I want to make sure they’re the best at what they do. I feel the same about Santa. I want it to be a great experience for them and I want it to be a joyful experience for them and that’s why we have Santa School,” Andrews explained.