Spirit of giving alive and well in Coaldale 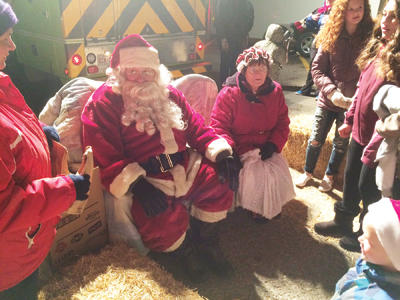 Jolly old St. Nick and Mrs. Claus need back up during the holiday season. That’s when local Santa helpers kick into high gear to help make the holidays merry and bright for kids and kids at heart. Coaldale’s Alex Hann and Eleanor Doram have Santa’s seal of approval, as the dynamic duo are the big guy’s official ambassadors south of the North Pole. For the past 13 years, Doram (A.K.A. Mama Claus) has delighted children of all ages during Coaldale’s Country Night of Lights celebrations.
“Somebody phoned me and asked me if I wanted to do it and I said yes. My husband and I, we used to do Santa Claus things. We used to do private parties and the little kids are just the greatest. I had asked my Santa if I could go with that Santa,” she joked. And the rest will go down in history, similar to the back story of some red-nosed reindeer.
As for the holidays, Doram said the Christmas spirit should last throughout the year. So, why does Doram sometimes endure -40 temperatures during Coaldale’s, at times, frighteningly frosty festivities?
“I like doing it,” she said, plain and simple.
Hann said he’s been helping out his good friend Kris Kringle for the past 25 years or more.
“I’ve done it in the parade, as long as they’ve had one and then I’ve done it for the firemen and other groups before that. It’s been awhile,” Hann noted. “It’s just one of those things I like to do,” he added.
When kids come bouncing up and they are so into it and so real and honest, Hann said, it’s just a really awesome experience. “I’ve done it in some of the darker moments of my life and it has always picked me up and it’s always been good for me. Two years ago my mom and sister passed away and it was around Christmas and to do that, was just a distraction and it just took my mind some place else. For me, I got as much that year, as I hope I gave,” he said.
As long as kids still want to come and tell him his secrets, Hann admitted, he’ll keep ho, ho, ho-ing. “I try to spend as much time as a kid wants. They sit on my knee or wherever they want to be. I’ve learned you don’t reach out to kids if they are crying and they don’t want to come to you,” he said. “It’s things you learn as you go along. You don’t want to make somebody do something they don’t want to do and give them a bad experience,” added Hann.
Hann joked he is probably on his second generation of kids he’s had on his lap. “I recognize some of the families,” he said. “It’s an interesting experience.”
According to Hann, he’s had some kids say to him, “You’re the real Santa. We’ve gone to others, but you’re the real one.”
“That’s kind of fun,” he joked.
As long as people believe and have hope, he and Doram can contribute to that, “I am a spiritual person and I have my beliefs, but this is one I think is OK to have people just come and be themselves.”
“It’s one of those things I get to do in life that I find so interesting and so cool,” he added.
On the flip side, Hann said, he’s had children sit on his lap and ask for a bed or a blanket, in which he has wondered how a child can live in Canada and not have a bed or a blanket. “In Coaldale, some kid doesn’t have a bed. What I’ve done now is, I have family close, and if there is someone that had a need or a want like that, I make sure to find out who it is and who they are and we’ll make arrangements,” he said.
Some kids will ask for the moon or a puppy or even a horse and have lists a mile long, while some children ask for something as simple as a book.
“To me, that’s when I really feel like I’m touching somebody. Because they’re being so honest,” Hann said.
The moments Hann remembers most are the ones where children are the most honest.
“It touches my heart and then I’ve got to try and do something,” he said.