Feist to retire as fire chief 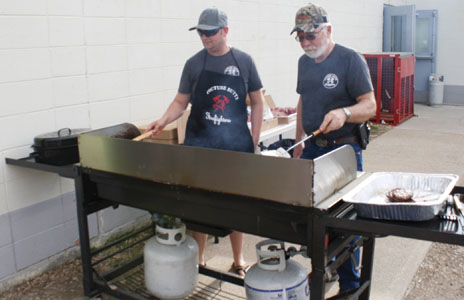 On Jan. 5, Fire Chief Dave Feist officially retires from Picture Butte and District Emergency Services.
“We often take for granted the very things that most deserve our gratitude. On behalf of the Town of Picture Butte, I would like to thank Dave for his dedicated service to our fire department,” said Picture Butte Mayor Wendy Jones.
Feist noted he has been a member of the emergency services department just shy of 31 years and has been fire chief for the past three years.
“It’s going to be an adjustment for me because the department has been a part of my life for over 30 years. I just feel now, with the younger people that are there, are really well-trained and I just feel it’s time for me to step back and let them take it over,” he explained.
Recently, the department has gone through a few changes, as former Deputy Fire Chief and EMT Lead Amy West resigned from her position and her brother Frank West is now the current deputy fire chief and staff has been hired in the EMT area of emergency services.
“I think we’ve done pretty well on any transitions we’ve had to make. With the new policies and unfortunately we did lose Amy, but life carries on and there’s been people that have stepped up to take her position,” Feist added.
As for a new fire chief once Feist retires, Feist said there will be an election amongst department members.
“For whoever is eligible to be chief. There will be an election on Thursday,” he said.
Feist said he will still be around after he retires. “If they need any help or advice with anything. But, I’m just going to take it easy for awhile,” he joked.
Over the years, Feist noted, there have been a lot of changes at the department.
“It used to be where training didn’t have to be nearly as intense with what it is now. Equipment wasn’t nearly as good as what we have now. We’ve made a lot of major purchases and we’ve got a lot of really good equipment on the floor now,” said Feist.
Feist said the emergency services department having ambulance service has definitely diversified the department.
“It’s something everybody has really chipped in and put their best foot forward to make everything work. Right now, better than half our department is licensed for the ambulance and is running on the ambulance service,” he said.
Volunteer-wise, Feist added, the department could use some new recruits.
“They are still slow on coming in. I’d like to see a lot more people step forward and be a member of the department, but the ones we do have are very dedicated,” Feist said.
According to the retiring fire chief, it’s been a good 30 years on the department. “I am going to miss it.”