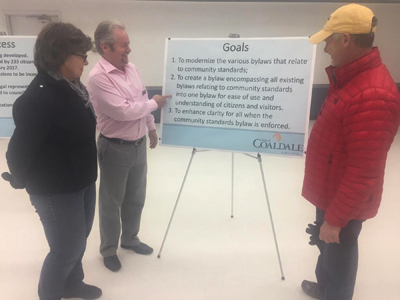 Coaldale’s new proposed Community Standards Bylaw is one step closer to becoming a reality, as an open house was held last Wednesday for residents to come out and learn a bit more about the proposed bylaw and to voice pros and/or cons, in regards to the proposed draft document.
“We’re revamping our Community Standards Bylaw. This is a bylaw that covers a number of different items with regards to what we call ‘community standards.’ This bylaw has been in draft for probably a little over a year now. What we did in the fall, we revamped it again just to double check it and then an electronic survey was available to the citizens of Coaldale. We had a really great response to it. We were looking for their input on what they thought of the bylaw. We had 233 people actually fill out our survey and respond, which is really good. We also had 92 of those people take the time to give us some written comments. We took those comments and we incorporated them into the draft and then last Wednesday was another opportunity to have an open house, where people could come and see the results of the survey we did, as well as provide any more comments,” explained Mark Murphy, the town’s director of emergency management. Murphy added the bylaw encompasses a total of nine different bylaws currently available to the citizens of the Town of Coaldale.
“They can get access to those, but what we wanted to do with the Community Standards Bylaw is to try to incorporate all those into one bylaw, with the goal of making it easier for citizens to understand and to get access to and putting them all together, as well as giving a bit of clarity for when we have to enforce those bylaws,” he noted.
According to Murphy, the next step for the bylaw is the town will take the comments and responses from last week’s open house and the bylaw draft will be fine-tuned one more time.
“Making sure, as best as we can, everything is good to go and then we’ll send it off to our legal folks from the town. They’ll do a once over from a legal perspective to make sure everything’s good to go and then we’ll take the bylaw and we’ll present it to council and they’ll go through the first reading,” he said.
Once the bylaw passes first reading, Murphy pointed out, the bylaw has to go to a public hearing under the Municipal Government Act (MGA). “These types of bylaws have to go for a public hearing.” The hearing allows residents to provide feedback.
“If there is more changes that have to be made, then we make those changes and then it will go back to council for second and third reading and then it will be passed into law,” Murphy said.
Murphy said the new bylaw would encompass property maintenance, untidy or unsightly properties, control of weeds, graffiti, flyers, recreational vehicles, sidewalks, snow removal and it will also encompass public behaviours.
“Things like littering, fighting and panhandling. Noise will be in there, as well — noise issues. Fires, in terms of fire pits and that kind of stuff. It will also have details on what we call ‘order to remedy.’ If somebody has a property that needs to be fixed up, we can put in what they call an ‘order to remedy,’ so this is part of an enforcement procedure people would have to fix up their place and it also describes municipal fines and we have a schedule for what the fines would be for the various different aspects of parts of the bylaw,” he said.
A target date for the passing and implementation of a new Community Standards Bylaw is May 1.