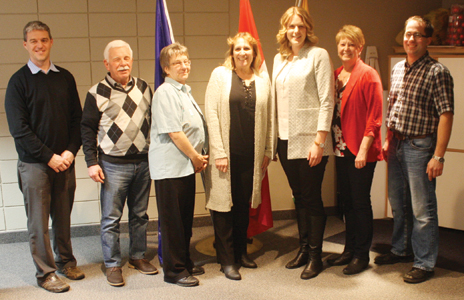 Lethbridge MP Rachael Harder paid a visit to Picture Butte town council last Monday night to hear back from council in terms of what is happening in the town and what the town’s priorities are moving forward into the future.
Harder said traditionally, at the federal level of government, a member of parliament would be made aware of any federal grant money available to municipalities.
“That’s no longer the way things are being done. If there’s grants available, you would probably be the first to know and if you receive funding you will be the only ones to know. I rely on you, which is an unfortunate circumstance. I try to keep my ear to the ground as much as I can. The budget comes out and that will give me at least some direction of where the money is going in the terms of the prioritization of this funding. I’ll certainly go through that with the priorities of my municipalities in mind, but when it comes to the opening of specific grants and the applications and such, unfortunately I am not kept in the loop,” she explained last week.
According to Harder, she would enjoy the opportunity to work with the town on any applications for funding the town is interested in pursuing.
“Whether that’s writing a letter of support or advocacy on your behalf or trying to pursue a conversation with the minister on your behalf — that kind of thing. I’m more than happy to do those things. I just need to be asked,” she said, adding she would like to know if the town does receive any funding, so she can follow up.
Lagoons, Mayor Wendy Jones said, are one of the town’s priorities.
“Our licence expires March of 2018 and they (Alberta Environment) extended it because I think they’re not up to the new environmental standards,” she noted.
Town CAO Keith Davis explained the town received an approval for a year extension.
“Usually, they extend it for five years, but we’re expecting Alberta Environment will require additional treatment,” he said, but the town won’t move on anything until it gets notification.
Jones noted another priority is the town’s arena, where many children and families skate and play hockey. She said five or six years ago money was spent on updates to a new ice surface, new equipment and machinery, new boards and a new ice plant, but now there are issues at the arena, inside and out.
Davis added the issues haven’t been assessed, but a pall park estimate would put the updates to a million or so. Outside, Davis noted, the roof needs repairs and moisture is penetrating certain areas of the facility.
Harder turned to gas taxes during her discussion with council. A gas tax should be returned to the municipality according to its purchase and not according to per capita, Harder noted. “That would in fact be the fair way to remit the gas tax. The truth is, all the people that think that way, are rural people,” she said.
“A portion of my fuel, everytime I fill up at the pump, is going into this fund and this portion is not coming back to my area and that is its original intent. It’s original intent was to come back. To be able to build my infrastructure, my roads, my bridges — to serve my community. The fact it is not is a problem and it’s particularly a problem for us in rural areas because that is one of the best ways of getting that little extra revenue we need for infrastructure projects,” she pointed out.
Lobbying this change may be a good effort or a rallying point of interest, she added, but presently she hasn’t heard anything about changes to the gas tax.
According to Jones, the town just created an Infrastructure Master Plan. “We have an infrastructure deficit,” Davis said, and the town is working with a 10-year capital budget from an organization, along with grant monies the town has obtained.
“We will be working towards knocking off projects that they’ve recommended or need to be done and council is on board with that,” he added.
By the end of 10 years, Davis said, he believes the town will still have a $12 million infrastructure deficit. But, it’s a common story in small and large communities.
“We are still growing,” Davis said.