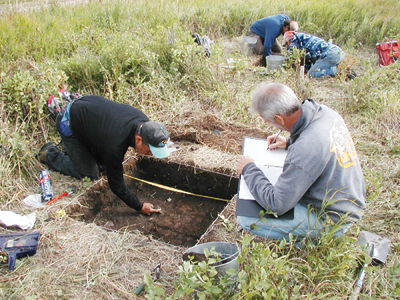 Coaldale has its very own Indiana Jones, as southern Alberta could be considered a Jurassic Park of sorts. Neil Mirau is from Arrow Archaeology, an archaeological consulting firm, located in Coaldale.
“We consult with industry. In Alberta and in Canada, when a developer or company wants to do land development — build a golf course, drill an oil well, build a subdivision, put in a new highway — they’re disturbing ground and they’re impacting the surface. For a lot of that, when the development is in native prairie or forest or otherwise an undisturbed area, the provincial governments require a historical resource consultant. Archaeologists or paleontologists come in and look around to see what’s there and dig it up or record it and alter the development to avoid it or to, if necessary, dig it up to allow it to proceed,” Mirau explained.
All the provinces in Canada have similar legislation, he noted.
“The U.S. has similar legislation. Most of the first world and in fact much of the second and third world have historical resource protection. Archaeological sites around the world are protected and we’re kind of the guys that are on the frontline making sure fewer of them get hit, as few as possible,” he added.
Uncovering Mirau’s past, he previously worked for the federal government and transferred to Lethbridge from Calgary and found a house in Coaldale at that time. Mirau said he went back to school at the University of Lethbridge and the University of Calgary and decided Coaldale would be a great place to start a business.
“We’ve been operating as a business since 1999,” he said, adding the business operates in Alberta, B.C. and Saskatchewan. The business has four full-time employees and five contract personnel.
Historically, Mirau is originally from southern Saskatchewan, where he first dug into archaeology as a kid.
“Probably 10 or 11 years old, when my brother took me out to an archaeological site, which was being excavated in Gull Lake,” he said. And then he forgot about all things archaeological at the time.
Mirau added he went through a normal education, went to college and started work with the federal government and then after getting laid off he had to decide what he wanted to do.
“As it turns out, the U of L had a very good archaeology program,” he said, adding he decided to give it a shot and graduated from the university and studied archaeology at the U of C and even taught at the U of L and an archaeologist friend of his, located in Cardston, suggested they open up a business.
“We started in 1999 and had some ready made contracts we walked into. We had probably five years of very steady work in B.C. and that allowed us to get a foothold in Alberta and get up some capital and expand the business here and in Saskatchewan,” he said, adding the two entrepreneurs of the digging kind were very fortunate and were lucky.
“We’ve excavated 500-600 historical resource assessments over the last several years,” he said, adding the company has found a lot of material of archaeological significance including big camp sites, where First Nations people camped for years that have never been recorded before, paleontological sites, and dinosaur material.
Currently, Arrow Archaeology is dealing with a couple of mammoth finds in Saskatchewan discovered last summer. The company has also uncovered old sites, about 7,000-9,000 year old, which are highly significant because they’re not very common. “The culture here, the human culture where we were always a hunter and gatherer culture prior to the arrival of Europeans. People were mobile. They moved around the landscape and they didn’t farm here, but they had large camp sites and some very significant sites. Some of the most well-known sites in North America are located within 100 kilometres from here,” he said, which include Writing-On-Stone and Head-Smashed In Buffalo Jump.
“These are sites if you talked to somebody in Texas or Europe interested in plains archaeology they know of those sites, they know it’s there and why they’re significant,” he said.
Southern Alberta, he said, has a lot of highly significant sites and B.C. and Saskatchewan.
“We’ve worked on things like human burials. Uncovering humans buried for a long time, which is really interesting. People think it’s morbid, but it’s really interesting,” he noted.
Probably most people driving through the landscape don’t think about what is beneath the prairie surface.
“Virtually all parts of southern Alberta were used and occupied by First Nations people for 10,000 years. There’s been millions and millions and millions of people that have lived and died in southern Alberta and Alberta and they’ve left their traces all over. There are people in Taber and Coaldale I know, that as kids, went out and collected thousands of arrow heads and projectile points,” he said, adding there’s still native prairie here, which is getting rarer and rarer.
Mirau said if a person travelled straight north from Coaldale to the Oldman River, where Highway 845 crosses the river, there are a dozen wonderful archaeological sites still there.
“They’re sitting there in native grass. Ranchers and farmers, where they know about them, do a good job of protecting them,” he said.
According to Mirau, there are close to 50,000 recorded archaeological sites in Alberta and there are more being found.