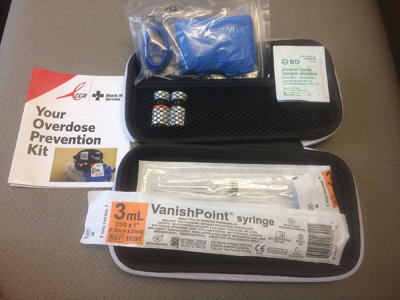 As of last month, changes were announced in regards to a provincial naloxone strategy for Medical First Response (MFR), including ministerial orders that permit non-regulated first responders such as firefighters and law enforcement to carry and administer naloxone to patients.
According to Alberta Health Services (AHS), the province and other regions throughout Canada are experiencing a public health crisis related to increasing misuse of synthetic opioids such as Fentanyl.
With the increased prevalence of opioid overdose in Alberta communities, AHS has noted, MFRs can substantially contribute to positive patient outcomes when their skills providing supportive care measures such as airway maintenance and ventilation assistance are combined with the administration of naloxone.
AHS has noted — while there is a lot of focus on naloxone, it is important to remember it is not the first line of patient care. MFRs, at all levels of training, are already able to treat suspected opioid overdose by providing critical airway and ventilation assistance. Naloxone, AHS has noted, can be very beneficial for patients when administered appropriately, but it does not replace other supportive measures.
Locally in the Lethbridge County region, Nobleford and District Emergency Services will be utilizing naloxone kits. Recently, Fire Chief Ryan Wagner noted, AHS under the MFR program has distributed the kits to the Nobleford department, as well as training aids for the process. “Training includes a third party organization coming in and doing the education and practical skill testing with all our members. AHS had done quite the research into what we as first responders needed and which method we preferred before distribution of the lifesaving system,” Wagner explained.
Mathew Conte, fire chief of Coalhurst Emergency Services said the department took training Mar. 1 for the naloxone kits. “We currently now stock them on our first out apparatus,” he noted.
A survey conducted among MFR agencies throughout the province indicated 91 per cent of respondents are in favour of carrying naloxone for administration to patients, according to AHS.
It was also clear both the Intramuscular (IM) and Intranasal (IN) methods of administration are strongly desired. The ministerial order specifies responders must complete naloxone training required by their agency prior to administering it to a patient.
To support this requirement, a provincial naloxone training module has been developed in co-operation with Edmonton Fire Rescue Services applicable to all MFRs Standard First Aid and higher and covers both the IM and IN methods of administration, AHS noted.
Kevin McKeown, Coaldale’s fire chief said Coaldale and District Emergency Services has Narcan kits available for use by qualified medical first responders on the town’s fire/medical response units.
“We had approximately 15 firefighters take the Narcan training back in December 2016, on top of that we have several EMTs and paramedics already qualified to administer Narcan. We carry the IM injection naloxone kits that are provided and funded by AHS,” he said.