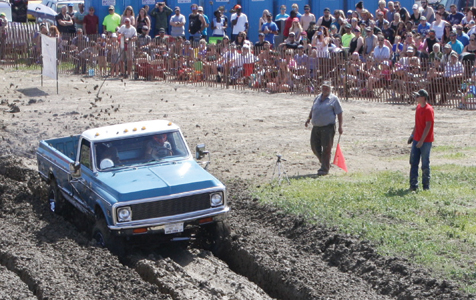 Smash and Splash at the 8th Annual “Carnage in Coaldale” Demolition Derby June 3 at 1 p.m. and Mud Bog June 4 at 11 a.m. with a new location — one kilometre north of the Coaldale Inn on Highway 3. The event is presented by the Kinsmen Club of Coaldale.
“That property belongs to the Town of Coaldale. They were nice enough to let us use it for the next four years for sure and possibly longer, depending on the expansion of the Coaldale Industrial Park. That will save us a lot of hassle, in the sense where we were previously having it in Cottonwood Estates, we were slowly running out of room,” said one of the event’s organizers and Town of Coaldale Deputy Mayor Jack Van Rijn.
Van Rijn noted last year the Mud Bog event had 79 trucks registered, so that’s why this year, the Mud Bog starts at 11 a.m.
“We’re going to have two tracks this year, instead of one. That way, it will speed up the process between classes. We can have one already set up and good to go and as soon as that class is done, the other track would be set up for the next class to go. We’re hoping that will speed up the racing throughout the day,” he explained.
This year, kids can take a ride on the Jurassic Attack Monster Truck Ride once again.
“The monster truck is going to be back again giving kids rides. We’ll have a separate little track area set up for him with small jumps and bumps,” he said.
There will also be a diverse selection of food trucks to feed the hungry demo derby and mud bog enthusiasts.
“We’re going to have 10 of them. That will be available for any appetite. There will be all kinds of different things available there,” he said, adding the Kinette Club of Coaldale will also be offering food sales.
“They are the only non-profit group working on the food side,” Van Rijn said.
Also, Van Rijn added, there will be a vendor row on location.
“We’re selling vendor spaces to anybody that wants to come and sell their product or advertise their product. As part of that, we’re going to have North and Company from Coaldale sponsoring a kid zone. That will be free to kids to go in there. There will be a bouncy castle, face painting activities and such,” he said.
“Carnage in Coaldale,” Van Rijn said, brings in cars from all over Alberta, B.C., and in the past, even Saskatchewan. “We are the largest demolition derby in Western Canada right now.”
Over the two-day event, Van Rijn said the hope is to attract close to 8,000 people and 100 per cent of the proceeds are going back to Coaldale and district. “We have several projects on the go. Playgrounds seem to be the latest thing we’ve been investing in. The most recent one is the Coaldale Christian School,” he said.
Coaldale Kinsmen, Van Rijn added, are also looking at spending some money at the town’s Community Centre.
“They want to make a fenced-in patio area on the north side of the Community Centre to open up the venue for larger functions and give people the option to go sit outside. It will be fenced in and it will be licensed, so if you had a wedding there and people want to go sit outside and have a cocktail, they can do that,” he noted.
According to Van Rijn, the club is always looking for members. If anyone would like to check out the club call Van Rijn at 403-382-0099 or e-mail contact@coaldalekinsmen.com.
In the past seven years, Van Rijn noted, the club has raised in excess of $175,000 for community-minded projects. Another fundraiser of the local Kinsmen is the annual Harley Raffle.
“That’s always drawn at the end of December. We will have all the prizes at the demolition derby, so people can see what’s going to be available. The price of a ticket is $10,” he said.
Admission is $10 per event and 12 and under are free. For derby registration info contact Jay at 403-795-8510 or Lee at 403-312-7022. For Mud Bog registration contact Randy at 403-634-2137 or e-mail contact@coaldalekinsmen.com. Remember, no pets allowed and bring lawn chairs. The new location of the event is north of Coaldale on 8 Street, north of the Coaldale Inn (west side of the road, follow signs). For more details or to download a registration package please visit coaldalekinsmen.com or the organization’s Facebook page.
Rain delay date is June 10 June 11.