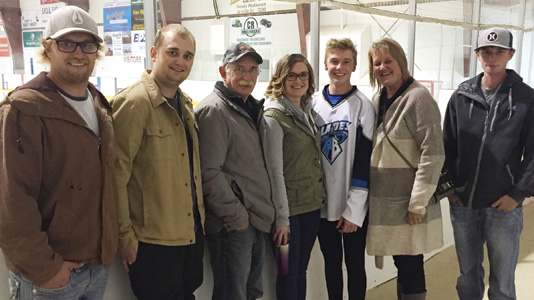 Picture Butte resident and minor hockey enthusiast Joyce Graham recently was awarded an Alberta Hockey award.
“For my years of dedication and service,” she noted.
Graham and her husband have been involved with Picture Butte Minor Hockey for the past 23 years. Her husband even coached for six years and all five of her kids went through minor hockey in Picture Butte.
“I am extremely honoured,” she said, adding this is the first time winning an award for her years of service and winning the award was quite unexpected. The award was presented earlier this month in Red Deer.
“I didn’t have a clue,” Graham said.
According to Graham, she has lived in Picture Butte all her life — 50 plus years and her five kids all went to school in the Lethbridge County community.
“Any of their sports, we’ve been involved with — helping out and taking them wherever,” she pointed out.
Hockey Alberta, she explained, picks one recipient a year in every zone in the province.
“I was the recipient for Zone 5.”