Martens to hang up council hat after years of community service 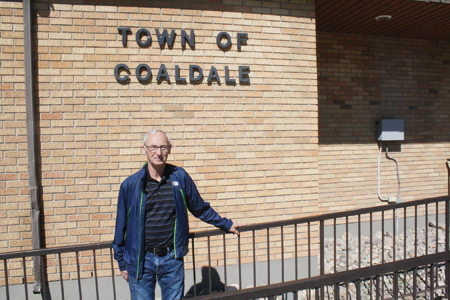 Coaldale Coun. Bill Martens has decided not to run for a seat on town council this upcoming municipal election in the fall.
“I’ve nearly done it for 31 years. I think it’s time I retired,” he said, adding part of the decision to retire was to spend more time with his wife, now that she is also retired. Martens has served many terms on council with his first term between 1971 and 1974.
“Then I got married and had a young family, so I said no more,” he said.
In 1989, Martens continued, his kids were older and his wife had gone back to work. Martens and his family have been a part of the Coaldale business community for decades.
“I sold the store and I had a bit of time on my hands and I said I’m going to run one term,” he noted. And one term turned into many.
Martens pointed out he is 75 years old and was born and raised in Coaldale. Historically speaking, the Martens family has always been connected to the downtown core.
“My grandfather started the business where Westland Insurance is now. Then my dad and uncle, they built the building where Dance Images was. My cousin John and I moved over to where Wally’s Pizza is. We moved in there in 1967 and I sold my business in 1987,” he explained, making a long story short.
“We thought about keeping it for our sons, but neither one of my boys were interested,” he added.
Bill’s father Peter also sat on town council as a councillor in the late 1950s or early 1960s, Martens recalled.
“When I was on from 1971 to 1974, the population of Coaldale was 2,700. When I was elected in 1989 it was just over 5,000,” Martens said.
“I’ve seen a lot of changes — huge, massive changes.”
According to Martens, over the years there were some good changes and then some he wasn’t too sure about. “But that’s growth. There are changes,” he said.
One of the changes for the positive, as far as Martens is concerned, is when the town had to upgrade its water treatment plant.
“McCains wanted to come to southern Alberta, which was in the county. So there was McCains, the county and the town and we needed to upgrade our water plant,” he said, adding the three stakeholders decided to build a pipeline from Lethbridge to Coaldale instead of pumping water from Stafford Lake to Coaldale.
“We sold that pipeline to the county, so they could run the water through to McCains. That was one of the major very positive things,” Martens said.
Martens added the town spent the past 10 years working on storm management, which is an ongoing project. According to Martens, the relationship between the town, the county and the St. Mary’s River Irrigation District (SMRID) improved.
“Now that the three are working together, it’s so much nicer to work together,” he said.
Martens said what he’s really going to miss about sitting on council is being involved with future annexation.
“Because of my involvement I’d like to remain involved. Annexation is coming up. That means you’ll have to work on Area Structure Plans and work with developers. I really enjoy that,” he said.
“There’s going to be some difficult decisions to be made under the new council,” he added.
One concern Martens has is the eventual and inevitable upgrades to the downtown core and the town’s main street.
“How it’s going to impact the businesses. They are 60 years old. The infrastructure — something has to be done, but what happens to the businesses is what concerns me most,” he said.
Another concern Martens has is when the federal government implements marijuana legalization.
“How is our community going to handle that with sales and things like this? How’s it going to impact our community? That’s one I’ve thought of but I don’t have a solution,” he said.
Martens plans to step away from any town-related committees or projects in the first year of council retirement.
“In the future, I might let my name stand for some of the committees and get involved again,” he added.
Coaldale Mayor Kim Craig said he has been fortunate to have been able to serve on council with Martens for the past 13 years.
“Having a member of council that served for over three decades was quite valuable, as he was able to provide ‘corporate memory’ on a great many issues, often times being able to give newer members of council some context with regards to why previous councils made certain decisions,” Craig noted.
In Craig’s experiences, he has found Martens was often an early adopter of new and innovative ideas.
“Bill was always prepared for council meetings and would seek clarity in order to make his final decision. On behalf of the residents of Coaldale and town council I thank Bill for his many years of dedicated public service and wish him great health and happiness in the coming years,” said Craig.