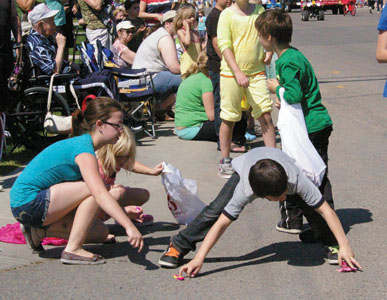 In the original film, “Willy Wonka and the Chocolate Factory,” the candy store confectioner sang, “The Candy Man can.”
Well, in Coaldale, it’s the businesses and residents who can — during the Coaldale and District Chamber of Commerce and the town’s annual beloved and highly-anticipated Candy Parade, which is a part of Settler Days July 7-8.
This year, the fun begins with a cribbage tournament Friday night from 7:30-9:30 p.m. at the Community Centre. Admission is free. Don’t miss the Knights of Columbus Pancake Breakfast Saturday morning from 7-10 a.m. at the Community Centre. The Candy Parade kicks off at 11 a.m. from Jennie Emery Elementary School and will go north to 20 Avenue and west to 19 Street and south to 22 Avenue and east back to Jennie Emery.
A Celebration of the Arts will also be held at the Community Centre from 10 a.m. to 4 p.m. There will be visual and performing artists featured and at the Coaldale Public Library from 12-4 p.m. there will be spoken word and literary artists featured. The library will also be holding its annual Book Sale from 12-4 p.m.
Plus, downtown and at the Coaldale Arena there will be buskers before and after the parade. A Craft and Trade Show will be held at the Coaldale Arena from 10 a.m. to 4 p.m.
“It’s a Celebration of the Arts. There’s visual arts at the Community Centre with a few performing artists throughout the day, not a set schedule, it’s just kind of like an open house concept. There’s buskers downtown throughout. They’ll be setting up more after the parade. As you wander downtown to enjoy the buskers, pop in at the library to enjoy a few spoken word artists,” said Tammy Trelenberg, member of Coaldale’s Gem of the West Museum Arts and Culture Committee.
“Come out and have a good time,” she added. “It’s one happy community event.”
For more information about Settler Days check out the advertisement below.
“The upcoming Settler Days is a great way to kick off the summer season. With all the candy given out at The Candy Parade — children of all ages should get a sugar high to take them well into the dog days of summer,” said Coaldale Mayor Kim Craig.
“Town council really appreciates all of the hard work and commitment shown by the Coaldale and District Chamber of Commerce in organizing Settler Days each year,” Craig added.