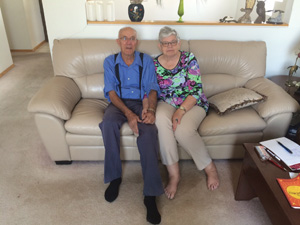 Miner’s Days 2017 kicks off this Friday in Coalhurst. Coalhurst resident Lawrence Watmough’s dad James, uncles and grandfather all worked in the Coalhurst coal mine.
“We just found out over the last couple of years, my dad and his family, his brothers and that were supposed to be working when the mine disaster happened. But, they had given their shifts to other people,” he explained.
According to reports, an underground methane gas explosion occurred at the Imperial Mine in 1935, killing 16 men.
At the time, Lawrence pointed out, the mine was closing and it was close to Christmas and the family decided they would give up their shifts.
“Most of the family was involved in farming, as well. They had a second income, where some of the coalminers didn’t have that. So, they let other people have their shifts,” he said.
“That has never come out until just before my Uncle Oliver passed away. He told his son that’s what happened. They were held responsible because they sent other people in. It wasn’t a very nice thing. My dad would not really talk about it that much,” he added. Lawrence’s dad was a driver boss and worked with horses.
Lawrence said the Watmough family had a farm three miles east of Coalhurst.
“That my dad had when he was working at the coalmine. He was running it in 1925. I took it over in 1960 and stayed there until 2000,” he said. He now resides in the Town of Coalhurst. “I moved once — from the farm to here,” he joked.
Miner’s Days has been going on for many years, but the Watmough family hasn’t been involved with the celebrations except for coming into town for the annual parade.
“I didn’t get involved until a couple of years ago.”
Nowadays, Lawrence is one of the organizers of the show and shine portion of the Miner’s Days festivities at Miner’s Park.
“I go to all the meetings and help plan the parade and all that,” he said, and this year Lawrence was chosen as this year’s Honourary Parade Marshall.
Lawrence said his dad always shared good stories with the family.
“He worked in the Coalhurst mine. He started work in the #3 mine, when he was a child,” — that’s before child labour laws.
“He was working oiling the wheels on the cars that went down the mine. He was working on the top,” he said, adding his grandfather worked at Mines #3 and #6 and his uncles worked at different mines in the area including the Shaughnessy mine. Lawrence recalled hauling hay to the mine to go down to the horses.
“That was in my teenage years,” he reminisced.
Lawrence added his dad really enjoyed mining and one story his dad shared was when he had to take his horse down to the river, walk across a swinging bridge, and go to work in the coalmine and repeat the process to head home for the night.
“That’s how people made their money,” he said.
Friday night join in on the fun at the Royal Canadian Legion in Coalhurst for singing and dancing with Karen’s Karaoke, silent auction and much more starting at 8 p.m.
On Saturday, don’t miss the pancake breakfast at the Community Centre from 8-10 a.m., cost is $2 per person, or six and under $1.
The parade kicks off at 11 a.m., and don’t miss A Homesteader Carnival at the Park from 12-4 p.m. at Miner’s Memorial Park with music by Alyssa McQuaid and Coyote Junction.
There will be a show and shine, beer gardens, food trucks, bouncy castles, a petting zoo, pony rides, games, train rides, a slip and slide, face painting and much more family fun.