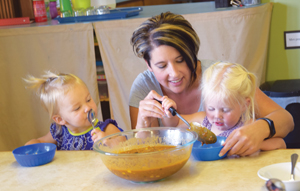 Starting Sept. 1, the Bee Hive Child Care Centre in Picture Butte is being run by a board of directors as a nonprofit organization.

“In a rural community, it is very hard to run a business like an early childhood program without the support of the community — the population just isn’t there to sustain it,” said Manna Middleton, consultant and former owner of the Bee Hive. “We believed it would be more successful to become a non-profit.”

Middleton said that “the idea” of daycares becoming non-profits have been increasing, as the federal government is investing in bi-lateral agreements for early learning programs alongside the province. To be able to access that funding in the next three years through the agreement, it was “important” for the daycare to become a non-profit.

The Bee Hive was started in 2002, and it was originally named Manna’s Daycare until 2008, when it became accredited.

Now, it is run by a board of directors — which consists of three educators, three parents and three community stakeholders — which was formed earlier this year in January.

“It has been a year in the making.”

Middleton will continue to work at the Bee Hive as a consultant to the new executive director, Nancy Stroeve. Stroeve had served as an alternate director at the day care for the past several years.

“It’s a new chapter we’ll be taking — being nonprofit — and being here as long as I have, it’s not going to change much, as I’ve kind of been in that position for a few years now,” said Stroeve. “The biggest change is that I won’t actually be hands on with the children, I’ll be mentoring the staff and guiding them, and doing the kind of everyday stuff that Manna (Middleton) used to do. As the role goes, I’ll learn more things.”

Stroeve said that for the next year, she will be learning the ins and outs of the role as the transistion is completed and things become business as usual under the non-profit banner.

With the board running the daycare, Middleton said that parents or stakeholders will be given a greater opportunity to make their voice heard on policy and procedures at the daycare. The day care’s charges will also enjoy the added bonus of having an invested community, and be able to access more services and activities in the community.

“It will just be more community driven I feel. I think the community will be able to invest more in this program and take ownership of its sustainability and its success.”

Although the transition has been completed, it did not come without its challenges. A lot of paperwork, time and money went into the transition, which has been stressful for everyone involved.

“It was just a lot of work, it took a tremendous amount of paperwork and commitment in terms of the board members involved. Just meeting, working out all the kinks of the banking, of the insurance and all of the particulars in transitioning over to the non-profit,” said Middleton. “It’s been extremely costly, just the lawyer fees and insurance changes and things like that. It’s been a big financial burden on the daycare, but all of those things have been done, and we’re transitioning in. And hopefully, we can access grants from the government to invest into the daycare. With the transition complete, the board will be meeting less regularly, but plans on holding at least four regular meetings a year.