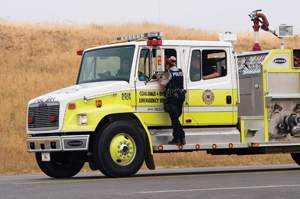 Lethbridge County Council is looking into how to improve fire prevention practices.

During the regular Sept. 7 meeting of Lethbridge County council, the topic of fire risk management was brought up. Added into the agenda as an addition, council had discussed the risks that came the dry and hot summer, and how to best manage them going forward.

“As everyone is well aware, I think we’re in unprecedented dry, hazardous conditions, this time of year in particular in the southern part of the province,” said Larry Randle, acting CAO for the county. “The county emergency management team is , broadly speaking,  maintaining a high level alert, and continue to monitor the situation with our emergency services coordinator (Darryl Beaton) — that’s kind of number one priority right now.”

Randle reported that the county’s emergency personal were prepared in case of an fire event, saying “We’re ready, fearing that call, but t the say time, ready for it”. The county’s emergency coordination center — currently located in the downstairs of the Coyote Flats room — is also set up and ready to go. They had also set out a public service announcement, reminding people to be careful.

Beaton was not able to be present for the council meeting, as he was meeting with other emergency management partners with the county, in order to help ensure they have a wildfire response strategy ready to go. The two county peace officers were also placing added stress on enforcing the fire ban and activities that could be deemed a fire hazard.

“Rain will be the ultimate solution, but it doesn’t appear, as far as I’ve seen, imminent, for a little bit here anyway.”

Coun. John Willms said that one problem they seen to be having, despite the fire ban and warnings, was people tossing cigarettes out their car windows.

“That’s almost a bigger danger then, we talk about being safe, like people having fire pits in a lawn like this, green all around it, you’re not allowed to have that. You’re not allowed to light that. You could have a fire hose there, it could be safe, very safe,” said Willms. “But to me, those kinds of dangers (cigarettes out windows) are the biggest, and I don’t know how you’re going to police that. If you see then throwing it out, you catch them, but if you don’t (you don’t).”

Coun. Tom White inquired about whether it was possible to do a controlled burn along the river, as most fires seemed to be starting west of the county, it would stop there. Randle said he could only speculate, put he would suggest that it was something Beaton would be looking into at his meeting.

White also inquired about getting goats or sheep — although stressing he wasn’t trying to promote those industries — to graze away the grass, noting “if there’s no grass to burn, it isn’t going to burn”. Robinson acknowledge that that strategy was used in other municipalities with success.

Reeve Lorne Hickey brought up a more sobering point. Refering back to the last wildfire that threatened the county, he said they had needed water bombers to put the fire out. This time, they will not be able to do that.

“I don’t think there’s one (water bomber) available, no matter how much money you have,” said Hickey. “And if you look to in the country, anywhere that’s dryland, you’d be hard pressed to find a dugout that’s got any water in it.

“We have a couple of things up against us; the fact that we have no water or virtually no water, and we have — spring was fairly good and there was grass growing around — so we have a lot of material out there that is potentially combustible. You go out there right now and try to cut it, you hit a rock with the mover, you start a fire too. Just be aware we have no water, potentially, almost, and I think don’t we haven the ability to get any water bombers.”

Hickey said that they had to continue stress caution.

Coun. Ken Benson inquired about whether the parks department could remove grass from the coulees, saying that if they kept it low it wouldn’t “burn so hard”. He also said with the last fire, they had put up a lot of fire break with the farm land.

“We haven’t had a fire there for years, so we have a lot of fuel for that,” said Benson.

However, Randle said that the county doesn’t own the land on the east side of the river, and so in order to do that, they would need to get permission from each landowner.

“We don’t have a blanket saying we can go in and burn people’s property, or go in and put in fire breaks or things like that,” said Randle. “Once you get past that high water mark that’s owned by the province along the river, it’s all individual landowners. So, maybe an educational process, but that’s going to be a long process, it’s not going to help us this year. And we don’t want to put it out there to start control burning your own property on your own, because that’s a disaster waiting to happen.”

Coun. Henry Doeve said that the emergency meeting was good news, and hopefully at the end of it they will know if they need any special equipment.

“Hopefully, we can see a report or have a conversation with Darryl (Beaton), after the fact, to see what they talked about and identify the right equipment,” said Doeve. “If we need water bombers, then we have a big situation. But if we can keep it down to where we can get in there and stop it quickly. We had a few week ago, our public works people see a fire at the side of the road, they were right on the spot and were able to put it out and take care of it. So hopefully, we’ll have that report identifying that we need some more, and we may have to make some sort of decision on something like that.”

Randle assured council that it will be “no problem at all”, saying at the very least, after the meeting, an email can go out summarizing the key points and new strategies. Additionally, he could also present a report at the next council meeting on Sept. 21.

Randle brought up the Fire Smart Open House held last February, noting they could do more proactive approaches such as that.

Council accepted the discussion for information.

*Update: An earlier edition of this sorry had incorrectly identified Rick Robinson, County CAO, as in attendance, when it was actually acting CAO Larry Randle. The Sunny South apologizes for any confusion.