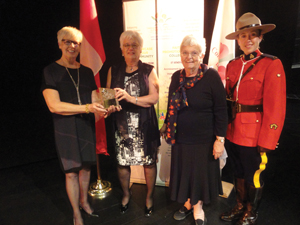 It is official; Coaldale is the prettiest town in Canada, at least according to the federal judges for Community in Bloom.

In an awards ceremony in Ottawa earlier this month, Communities in Bloom — Town of Coaldale chapter members Doreen Lloyd and Norma Beachan, members of the Coaldale CIB chapter, were ecstatic to learn that not only did the town receive a five maple leaf rating, but Coaldale had also took home the Outstanding Achievement award.

“Ours was the last one (presented), and I thought, ‘Oh, we’re not going to get anything” said Lloyd, the president of the Coaldale chapter, of the two-night ceremony. “And then just the last award, they called us up.”

The Coaldale chapter had competed against other similarly -sized communities across Canada to win their awards.

“It shows it’s a great community and it’s vibrant, and the co-operation we have with the town and with our committee and just all the town people, it’s phenomenal. I’m just so proud of our town. It’s just so amazing.”

The five maple leaf rating — 2017’s version of the five bloom rating, due to Canada 150 celebrations — is a coveted CIB award that means there is very little, if any, improvements needed to the town.

A non-competitive category, judges had came by during the summer and looked over the town over the course of three days, checking to see where it measured up in each of the six pillars; environment, floral, landscape, heritage, urban and forestry. The judges had remarked that the town was strong in their volunteerism and community involvement, and needed a little work in improving their urban forestry.

The second prize was for the Outstanding Achievement award, which was also a Canada 150 award. Lloyd largely credited that win to the big welcome maple leaf.

“It was just a high moment to run up those stairs and show off our town. And on the back of the school they had the back of the maple leaf, with all the little ones, all the donors. So when I was up in front, and I (saw them), so I started to explain to the people what all of those maple leaves meant, and the cooperation that we had for the town, for people sponsoring that project. That was huge.”

Coaldale had previously been awarded a five bloom rating in 2016, and had previously won a top award in 2011. Next year, Lloyd says they plan on entering in other categories, hoping to score well in them.

“There are so many other categories you can apply for. Once you’ve won your top national award, they have Circle of Excellence and this, there’s no end to awards,” said Lloyd. “I think it’s an uphill thing; we can keep on going.”

The provincial CIB awards ceremony took place this weekend, with results unavailable as of press time. CIB Coaldale is still taking nominations for Business of the Week, and is gearing up for Christmas light decorating and the Parade of Lights.