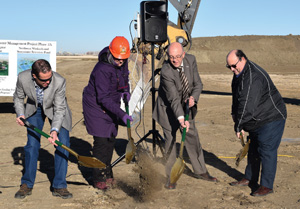 Taking place off Township Rd 92 west of Coaldale, the celebration marked the start of construction of the phase’s northwest wetland project.

“This project got under way in concept back in the late 1990s. There’s been several major rainstorm that were impacting the county, SMRID and the town (of Coaldale), and so we got together talking about what can be done about it, and it really came together in the early 200s, when we came up with the Malloy Master Drainage Plan,” said Kevin Viergtz, Malloy drain project manager for the town of Coaldale. “There’s no natural drainage here. We’re in a bowl, it’s an old lake bed, and all the water flows through Coaldale.”

Drainage has been an issue for the area, as it lies within the Malloy Drainage Basin, which cover an area of over 53,000 acres, including the Town of Coaldale and the surrounding area in Lethbridge County between Township Roads 9-4 and 8-2 and Range Roads 21-1 and 19-1. In addition to the lack of natural drainage, as the area is irrigated, the water doesn’t absorb into the ground normally, as it is already wet due to regular irrigating, and runs off when it rains. The area has flooded in 1995, 2002, 2005, 2010 and 2014.

After the 2002 flood, Coaldale, the county and SMRID began discussing the Malloy Basin drainage issues, and in 2008, the Malloy Drain Steering Committee was formed, composed  of elected officials and staff from the three groups, as well as representatives from Alberta Environment and Alberta Transportation. Work began on phase one of the project, upgrading the Malloy Drain east of Coaldale — which included upgrading 3,700 meters of drain, replacing of existing canal structures and upgrading the Highway 512 crossing — in November 2015, and the final section for that phase is now being completed.

Phase 2A will cost $5.4 million, and major components of the project include a drainage channel west of Evergreen Estates, a storm water surge storage pond with wetland component south of Highway 3, a pipeline across Highway 3 and CPR train tracks and a new wetland complex west of the Water – Wildlife Preserve located at the Birds of Prey Centre.

Phase 2A will be completed in two parts. The first is the wetland portion, with a budget of $2.5 million. A tender went out in September, with the tender being awarded to Tanex (2003) Inc./Dennis’s Dirtworx, with the lowest bid of $1,748,116. It is expected to be completed by the end of July 2018.

“The water will not only be controlled in how fast it enters our works to carry on towards some of our reservoirs, but it will also be much cleaner, and that environmental wetland prospect is really key to this project,” said George Lohues, SMRID board member.

“This is turning it into water that we can pass along going downstream that somebody may actually drink or use for animals. So this really cleans up the water and become really an asset,” said Lorne Hickey, Reeve of Lethbridge County.

Water entering the wetland will go through a Nautilus sediment pond and treatment marshes to improve water quality before entering the main marsh, which will store water before it is released at an controlled rate. There are also plans to connect the wetland to the Link pathway system.

“This is going to be a destination with the Birds of Prey (Centre),” said Kim Craig, Coaldale mayor. “I think the long-term effects will be the actual public enjoyment of the wetlands, and the aesthetic value it will bring. This will be a beautiful solution, and I think a lot of people will be able to embrace what the outcome will be, and really enjoy walking around it and be part of our community.”

The second portion of the project is the channel, south storm pond and pipeline components, which has a budget of $2.9 million. Between both project, 300,000 cubic meters of water storage will be created.

Project funding comes from a $4.38-million grant from the Alberta Community Resiliency Program, and $340,000 contributions from Lethbridge County, St. Mary River Irrigation District and the Town of Coaldale each.

“Today, I think it’s important to recognize, both the construction milestones and the partnership that made this possible. I’ve said many times that southern Alberta is the best example of common interests coming together, and this project is an excellent example of just that,” said Maria Fitzpatrick, MLA for Lethbridge-East. “Whether it’s here in Coaldale, or various other communities across the province, we continue to invest in Alberta’s flood and drought resiliency.”

“Ever since the High River flood of 2014, the province instituted the Alberta Community Resiliency program, and that funding is what’s really made this program possible for us,” said Viergtz.