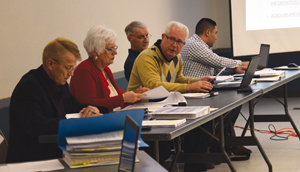 An Asphalt Batch Plant will be coming to Coaldale’s industrial area.

The name of the applicant on the development application is LASCO & Associated Companies.  The owners/partners of the asphalt plant are Ground Breakers Construction, J.B. Construction, Leighton Kolk and associated business Infinity Paving, Silver Ridge Construction and Matthew Wilson, who all have links to southern Alberta.

According to Richard Thiessen, Silver Ridge Construction general manager, LASCO was started in 2016, in response to a market gap in the asphalt business. They were temporarily set up in Willow Creek, but sought a permanent site.

Coaldale was the first place, he said, that they had made an application to. The companies involved with the plant are already connected to Coaldale.

“We saw a need for a permanent site for our operations. Permanent locations lead to permanent good process,” said Thiessen during the meeting. “The trend, especially in gravel production business, is that these sites move around from pit to pit, and it’s hard to make permanent fixes and permanent things in place, in order to handle the risk and assessment.

“So we want to move into a permanent site, to create good practices.

The asphalt plant and gravel crusher will be located on the northeast corner of Coaldale, at the intersection of 11th Street and 11th Avenue in the Town of Coaldale’s Northeast Industrial Park. The land is zoned as industrial, and Thiessen stressed that they would “a responsible part of the community”, and do self-imposed monitoring in addition to regular monitoring and checks from OH&S and environmental compliance officers.

During the meeting, residents on both sides of the issue were given the opportunity to speak. Residents raised concerns over odour, dust, decreasing property values, noise, road deterioration due to increases in heavy traffic and silica dust.

“We of course have to be opposed to this, because of the downwind effects we’ll take the brunt of,” said Don Kovacs, who lives adjacent to the site with his family. “Since I’ve been trying to decide the motive behind this development, the wind has been blowing from the southwest almost daily for the last two weeks. I fear that if this permit is approved, it will be like receiving a death sentence from the silica dust coming from the stockpiles and the facility when in operation.”

Those who spoke up for the plant said the asphalt plant would bring needed investment into the area. They agreed that checks and balances would be needed, but the plant will be good for the area.

“Being a Seasons land developer, and having worked with Alberta Environment and the town for many, many years, I am very, very aware of the rigorous controls that are in place to regulate these types of industries,” said Douglas Bergen, Coaldale land developer, acknowledging that the concerns of those in proximity to the site should be heard. “I take comfort in the fact that we have local individuals, willing to stand at this podium and bring a multi-million business to our community. That has some risks, but the comfort I get from that is that these are the same people that you will meet in the aisles of the grocery store and have to look you in the eye, with regard to the accountability they have to the community and what they’re doing.”

Commission member Richard Pitsol inquired about who would be responsible for land reclamation, should the soil become contaminated. Thiessen said that asphalt was not considered to be a contaminate, although controls will be onsite and waste product that would be reclaimed and put back into other asphalt product.

Commission member Jose Cortes asked Thiessen to elaborate on what he meant by minimal impact. Thiessen said he “didn’t deny” that there will be impact, with the biggest impacts being with two adjacent landowners.

“There will be minimal impact, as in we will make it as little as possible, that’s all I can say,” said Thiessen. “We will continue to work in an ongoing process, to hopefully make that lessen as we go forward.”

In response to public feedback, the MPC placed two additional conditions on the plant’s approval: that a professionally prepared Environmental Impact Assessment (EIA) be submitted and approved by the town before issuing of a development permit; and that a detailed nuisance mitigation strategy enforceable by the town be submitted and approved before issuing a development permit.

Other conditions of the approval include a dust control plan being in place and submitting a copy of their registration under the Environmental Protection and Enhancement Act Code of Practice for Asphalt Paving Plants from Alberta Environment to the town.

Additionally, in response to the growth of its growing industrial park, the town will be widening and paving 8 Street, from north from Highway 3 to 10th Avenue, in 2019, and there are plans to provide a direct access from Highway 845 into the Northeast Industrial Park.

Town CAO Kalen Hastings said that currently, there is a “moving target timeline” for the plant to be up and running, as all the conditions have to be met first.

“It’s going to taken time for them to be able to fulfill some of the conditions attached to their permit,” said Hastings.