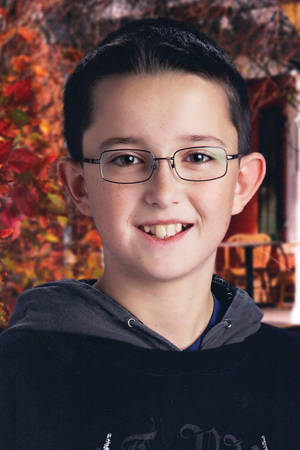 A 13-year old in Picture Butte is getting clean water to children in Haiti with his wish.

Trenton Dyck was diagnosed with stage four alveolar rhabdomyosarcoma (ARMS) in October 2017. When the Children’s Wish Foundation of Canada approached him to offer him a chance to fulfill a wish, he chose to use it to help others.

Trenton used his wish to donate $6,000 to help bring clean water and sanitation to children living in extreme poverty in Haiti.

“Water is such a huge part of everybody’s life,” said Trenton.

“There’s so many people who don’t have any clean water, and the water they do have makes them sick. We take that so granted a lot because we just get it straight from our taps. Something like this would help hundreds and hundreds of people, and disease would go down, and

“It’s a thing that will help people that are living.”

Trenton is described as an inquisitive child who asks lots of questions, and has a love of science. He could often be found helping out with the children’s ministries at his church and in the community.

Trenton has a very advance form of ARMS, and was given a couple of weeks to live earlier this month.

According to the Canadian Cancer Society, ARMS typically develops in the muscles of the arms, legs, chest and abdomen.

ARMS is a type of rhabdomyosarcoma, which is a cancerous tumor that starts in muscle cells or tissues that are precursors to those cells, and can spread to other parts of the body.

Rhabdomyosarcoma starts in muscle cells or in tissues that are precursors to muscle cells. It is a cancerous, or malignant, tumour that can invade, grow into and destroy nearby tissue. It can also spread, or metastasize, to other parts of the body. It is the most common type of soft tissue sarcoma that occurs in children.

With his wish, Trenton hopes to be able to help others in need.

Because of the 2010 earthquake and Hurricane Matthew in 2016, southern Haiti’s infrastructure was devastated, leading to problems like contaminated water and the prevalence of water-born diseases such as cholera.

According to the World Bank, a cholera outbreak after the earthquake claimed 8,700 lives. Water-borne diseases remain persistent in the area, although access to clean water lessens the risk of contracting them.

Providing clean water to those effected would dramatically lower the cases of waterborne-diseases in highly effected areas.

“There is a study that showed, out of the population, the disease rate went down from 85 per cent to five per cent,” said Trenton, on the effects of having access to clean water.

Trenton hopes that others would help contribute to his wish, for which donations are being gathered on compassion.ca.