Retired police officer recounts stories from the job in book 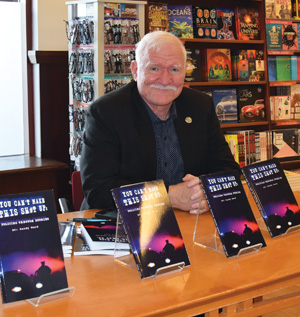 Drunk drivers pretending they weren’t driving. Calls too close to count. Items found in the backseat of a patrol car. Unwilling amateur sniffer dogs. A couple of chickens to pay a ticket.

As the title suggests, you can’t make this sh#t up.

All of these stories, and more, come from Randy Ward, a former Lethbridge police constable, who has recently published a book filled with stories from his time covering the Coaldale and Lethbridge area.

“I’ve always been a storyteller. And most policemen are story tellers — you know they like to tell stories, tell stories about different things that happened and those type of things,” said Ward.

“What intrigues me to write stories is that somebody would mention something, and all of a sudden I’d recall something,

“Little thing trig your memory, and you remember certain things. SO in this particular book, I wanted to be sure to put unusual things down, not the gory things, but unusual things.”

Ward got into policing when he was living in Kelowna, B.C. At the time, he was a member of the Canadian Armed Forces, but had always wanted to be a police officer.

He joined the auxiliary program, which at the time in B.C., meant that you were armed, had training and augmented a police officer when they went out on shifts.

“I got into that, and I knew that what I wanted to do was full-time policing. So I ended up going to the college in Lethbridge, and took the criminal justice program there, and was hired by Lethbridge (police service) before I even finished the program.”

During his time as a Lethbridge police constable, Ward performed many different departments, including the community liaison office, patrols, CID, break and enter detail, traffic and warrant detail.

“I always loved being on patrols, so I think that was my key focus. Everything brought me back to the street, all the time. I just loved being on the street and helping and doing what I can in that sense.”

Ward retired from policing in 2013, after 25 years on the job. After retiring, he got into the National Construction Safety Officer program and got his certification, deciding.

He noted that it was fairly similar to policing, as it involves interviewing people and “a little bit of paperwork”, visiting different sites and helping people.

Ward had originally planned to write a book on his experiences in policing when he first retired, but “life got in the way” and he put it off.

Then last year, he was sitting on a beach in Mexico chatting with someone about it, when his wife turned about and told him that he better get to writing it.

“I thought, ‘You know what? You’re absolutely right’. If I’m going to say I’m writing a book, I better write it.”

Although some stories were down on paper already, Ward got to work getting the rest of them down, drawing on help from the River Bottom Writers group, which he is a member of.

He also became familiarized with the ins and outs of the publishing process, as the book is self-published.

One thing he kept in mind while writing was keeping details about Coaldale and Lethbridge out of the stories, as he wanted everyone to be able to identify with the stories.

“The stories are similar all across Canada and across the world. Police officers can identify with that, and people can identify with it, throughout the world, so I didn’t want to link it specifically to Lethbridge and this area,” said Ward.

“I wanted to make it general in the sense that people in Nova Scotia can look at it and say, ‘Yeah, this kind of thing happens here’.”

Ward has published work in short-story compilations, but this is the first book he’s written himself. The mood of the stories ranges from tragic to serious to humor, and cover a variety of different situations.

“That’s what policing is like. You can deal with two deaths in one shift and then all of a sudden you deal with something so silly you have to laugh at it,” said Ward.

Since You Can’t Make this Sh#t Up came out, Ward says it has been selling very well. Copies can be picked up at the Lethbridge Chapters, Lethbridge Tactical and Amazon.ca.

Ward will be hosting launch party for the book at the Readymade Community Center on April 29, from 1:30-4:30, to celebrate its success.