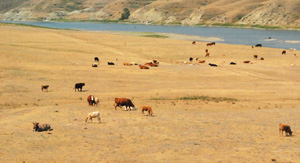 In a special meeting on April 27, Lethbridge County council discussed bylaw 18-014 — or the business tax bylaw.

“The MGA (Municipal Government Act) grants municipalities the option to levy a business tax, and if council chooses to, we must pass a bylaw before May 1, to do so,” said Tracy Anderson, director of cooperate services for the county, adding that the rates for the bylaw would be dealt with at their meeting, if the bylaw is approved today.

“As you know, the 2018 capital budget did include the business tax as a municipal revenue source, which established the revenue requirement for the tax. The bylaw provides the authority for business taxes to be collected from businesses operating within the county, and it has been implemented to generate municipal revenues to assist with the maintenance of the Market Access Network.”

The annual capital and operating budgets for the county was approved in December 2017. Anderson said that the bylaw largely mirrors the 2017 business tax bylaw, although it contains updates to reflect date changes, the MGA changes and a definition for ‘municipal assessor’.

The business tax’s revenue is being projected to be $1.45 million, at current rates. The revenue is a source if funding for the county’s current and future fiscal plans, and are allotted specifically maintenance of the Market Access Network. The 2018 budget had allotted $11.05 million for the Funding our Future program.

Reeve Lorne Hickey inquired about an exemption for greenhouses in the business tax bylaw. Anderson said that it was contemplated when they first discussed the bylaw, and it hasn’t been discussed since. Should council decide to revisit it, they could do an amendment to the bylaw later on in the year.

Coun. Klaas Vander Veen asked what the process was to explore that option. Anderson said they would want to do public consultations about it, and when they were first discussing the bylaw, it was a “contentious area of decision”, and they decided to exclude them initially.

Coun. Morris Zeinstra asked if she was aware other municipalities that charged a business tax for greenhouses, which Anderson said she wasn’t aware of any.

“I think we’re the only one to really have a business tax of this kind in Alberta,” said Anderson.

Hickey suggested looking at urban municipalities with greenhouses in their boundaries.

“Currently, I think there’s quite a bit of discussion about greenhouses that are in urban areas. So whether or not they’re being taxed or not currently, under the current legislation, they’re considered to be a farm operation,” said Hickey.

“I do know that there was some interest in the business tax idea, from urban municipalities who have greenhouses in their jurisdictions, so whether or not they went ahead with that, I have no idea.”

Anderson said that the City of Calgary was phasing out their business tax program, although they were recuperating the funds through different means, and it’ll be interesting “to see what they do”, as within their boundaries they probably have “a lot of that type of development”.

Council passed a motion to perform all three readings of the bylaw.

After the bylaw was passed, Anderson informed council that next year, the bylaw would likely be presented to them in January to avoid missing the May 1 deadline, although the rates will still come forward in May.