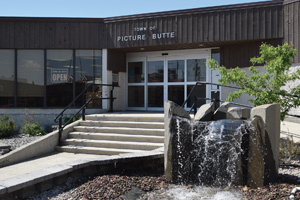 Manure spreading is now allowed within the Town of Picture Butte.

During their regular May 28 meeting, Picture Butte town council hosted a public hearing on bylaw 868-18, which aims to amend the town’s current land-use bylaw to allow for livestock grazing and manure spreading on land designated Urban Reserve. The bylaw had been given first reading during council’s April 23 meeting.

After going over the bylaw, coun. Cynthia Papworth requested that Steve Harty, a town planner with the Oldman River Regional Services Commission, show attendees of the public hearing which parcels of land the bylaw, would be effected. The land in question was a parcel west of the reservoir by Northridge, and some land located south of the town.

“None of the other parcels within the town have the designation, everything else is zoned residential, or commercial, or industrial, that sort of thing,” said Harty. “These would be the only parcels it could be applicable to.”

The bylaw applies only to agriculture manure spreading on Urban Reserve land districts. Fertilizers such as those brought in garden centers or hardware stores are not affected by the bylaw, and are allowed within town limits.

Ron Bezooyen, a local farmer with land within the town boundaries, spoke in favour of the bylaw. He said he felt that everything “they said was pretty accurate”.

Coun. Joe Watson said that those seeking to spread manure would have to call the town CAO, Keith Davis, and notify him, so he knows and “at that time, he can even say yay or nay”, as the town does have some jurisdiction over when it can be done. Bezooyen asked if a permit of a phone call would suffice for it, to which Harty said he would just have to “notify them”.

Speaking in opposition to the bylaw, Picture Butte resident Craig Whitehead called the bylaw a “regressive step backwards for the town”. He said that he was born and raised on a farm next to a feedlot, and while he understands the concerns of the agriculture community, he does not think this is a good idea.

“I have talked to citizens of different communities — Vulcan, Cardston, Raymond, Claresholm — and none of the citizens there can even believe the Town of Picture Butte is even entertaining this thought,” said Whitehead. “One question we would need to ask is does the town represent the citizens of the town, or do they represent the county citizens? If you represent the town, then do not allow manure spreading within the town limits. For those few farmers who have to use a different type of fertilizer, it would not be an economic hardship to them.”

Referring to the Doug Griffins book, 13 Ways to Kill Your Community, Whitehead called the bylaw “certainly one of the 13 ways”. Picture Butte, he said, had received bad publicity over the years over the smell of manure that comes from the county, and they do not need to add to it by approving the bylaw.

Another resident, Rhonda Trechka, speaking in opposition also voiced concerns about the smell. She said that when there was manure spreading behind her house last September, the stench was “the worst it has ever been in this community”, and on top of that, it lingered. Trechka had also submitted a letter to council on the matter, and urged them not to pass the bylaw, which in her view would benefit county residents, and not those living in Picture Butte.

“I’m looking at really who is benefiting here, I think it’s going to cause more rifts rather then mending things,” said Gibson.

“I’m concerned about that, because we do all have to get along. But I do live in here, and when people come here, it always seems like someone is spreading manure in town.”

Addressing Gibson, Watson said that there was a misconception that council was changing the bylaw, but what they currently have in place did not cover “any of this stuff”.

“Mostly, what we’re trying to do is put something in place, that was not there in the first place,” said Watson. “Probably, the only reason why there wasn’t spreading in those areas in the past was, is some of the owners just chose not to do so. So in effect, we’re not really taking a change with what we’re doing to manure, because manure wasn’t even mentioned in the previous bylaw.”

Davis explained that the issue had first came up last year, when someone was spreading within the town boundaries. He said he had  thought it was a noxious and hazardous use and wasn’t allowed. However, in the town’s Land Use Bylaw, under the Urban Reserve land district definitions, noxious and hazardous use is defined as “Those land uses which may be detrimental to public health, safety and welfare or those uses which because of their toxic gases, noxious smells, wastes, noise, dust or smoke emissions may be incompatible with residential or other development”. The term ‘manure’ did not appear in the bylaw.

Upon discovery that manure spreading wasn’t covered, the town sought to clear up the matter by introducing a bylaw that banned manure spreading and clarify other aspects in the land district. However, after local farmers protested that bylaw at a public hearing last year, it was scrapped and the council voted to draft a new one that allowed for manure spreading.

In response to a question, Davis said that the Natural Resources and Conservation Board does regulate and enforce manure spreading, and would follow town rules for manure spreading.

Two letters were submitted in opposition to the bylaw — one signed by several town residents and another by Trechka.

The first letter argued that the bylaw was contrary to town interests, saying that should the bylaw pass, instead of the town’s slogan being ‘Picture Butte, Picture Perfect’ they may as well go back to being ‘The Livestock Feeding Capital of Canada’.

The latter letter argued that bylaws should be passed to protect the citizens of Picture Butte, and this amendment was not in their best interests.

When Picture Butte Mayor Kathy Moore asked if council would like to discuss anything in the letters, Papworth took the opportunity to say she was proud of both slogans for the town.

“I’m thinking that passing this bylaw is good for our residents and businesses,” said Papworth. “Our town survives because of the agriculture in the area. A lot of our residents are employed by agriculture — whether by direct producer or by an ag-supplier. Some who have signed the petition are employees of have businesses directly related to ag, who support our town with a lot of fundraisers and supports the business in our town. All this support in turn helps to keep our tax rate down.”

Papworth said that the six-hour time limit and the three-year period between spreading wouldn’t bring a lot of discomfort to nearby residents, and called the move a “good neighbor” policy with the county, which could help them with future dealings, such as annexation.

Coun. Teresa Feist said when she first moved to Picture Butte in 1982, her family lived in Maple Estates Trailer Court until 1994. The trailer court is next to one of the affected areas, and she said while visiting family complained about the smell, “we didn’t notice it”.

“The smell, honestly, when they do spread it, that’s once every three, four years,” said Feist. “We have a thriving business community in this town, due to urban and rural people. So, if anything, we all have to work together on this. I can understand what all your thoughts are, but please try to understand the other side of it as well.”

Watson said it was important to understand the difference between Urban Fringe and Urban Reserve land districts. Urban Fringe land was land in the Lethbridge County, while Urban Reserve is land within the boundaries of Picture Butte. The town is surrounded by Urban Fringe land, whose owners can spread manure, and they’re control by the province, NRCB and the county — not by the town.

“They can go in any number of time a year — in a year — and we can’t do a thing about it,” said Watson. “We’re proposing, in our area, in the Urban Reserve, every three years — which equates into about 1,095 (days) — and with the application, while in the county they got 48 hours to put that manure down, we’re restricting these guys to six hours. We’re saying if they’re pulling every three years and can push that stuff down in six hours, it should minimize the discomfort in the community.”

Additionally, the NRCB stipulates a setback of 25 meters from the property line for manure spreading. The town has a setback of 75 meters, or three quarters of a football field. That, in addition with notifying the town, should also help minimize any discomfort caused.

“They’re also Picture Butte land owners, and they also pay taxes too. They’re business people, trying to operate the best they can. They’re keeping that land as clean as they possibly can. They’re being good stewards of the land, and they’re part of the larger community of agriculture that Teresa, Cynthia, were saying. They pay taxes, employ people, support causes in this community, and therefor they contribute to the quality of life and the benefits of Picture Butte.”

After the Public Hearing closed, council looked at the bylaw later in the meeting. Moore requested a record vote of the readings.

Council passed second and third reading of the bylaw in a 4-1 spilt for each vote.

Moore was the sole vote against for both readings.