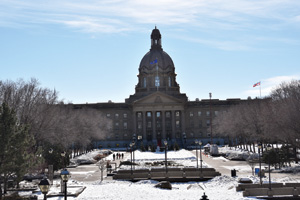 Taking place on Monday, March 18, Lieutenant Governor Lois E. Mitchell delivered the legislative tradition that outlines the current governments goals and plans for the next year. Sunny South News editor Nikki Jamieson was in attendance. Mitchell began the speech by highlighting the diversity of the province’s 4.3 million residents, and the difficulties it has faced over the years. While these challenges were overcome and lessons were learned from them, one challenge in particular continued to happen — the boom and bust cycle.

“For decades, governments in Alberta responded to economic busts in a predictable way. They made things worse. And everyday Albertans paid the price. The middle class got squeezed and the most vulnerable were left behind. One Alberta for the few. Another Alberta for everyone else. This time, however, with a new government in Edmonton, things would be different. Everyday Albertans – our families, our communities, our jobs – would come first. Your government would not pay lip service to honest government and then build Sky Palaces. We would clean up government and put democracy back in the hands of the people.”

Mitchell outlined several steps that the newly elected NDP government had taken to do so, such as banning corporate and union donations, strengthening lobbying laws, reducing politician travel and hospitality expenses by 80 per cent, increasing efforts to diversify boards, agencies and commissions and provide more budgetary information to the public, in order to increase transparency. Steps were also taken to diversify the economy and create jobs, with Mitchell highlighting investments in infrastructure, health care and schools.

The speech also pledged that the province would build and repair 4,000 more affordable housing units, invest in water infrastructure to ensure every First Nation in the province has access to safe and reliable drinking water and invest in rural broadband.

“Finally, for a modern province like ours, rural broadband should not be considered a luxury. It is a necessity and we will invest in a rural broadband strategy, helping people in rural areas get the same fast, efficient internet services as people in urban centres.”

Energy jobs would be protected, and government would continue to fight to get pipelines built, placing the failure to do so was placed squarely on “successive federal governments”. Citing the country’s support to get oil to tidewater, the government pledged to “keep the pressure on” to get the Trans Mountain Pipeline built.

“Canada’s inability to build new pipelines is costing the entire economy – both within Alberta and across the country. Albertans know this, and the frustration this issue has caused for workers and families is real. To be sure, despite setbacks, we remain firm in the belief that the Trans Mountain Pipeline will get built, and we will not let up until it gets built.”

As Alberta’s lack of export capacity is causing an oil backlog, the province had temporarily put a limit on oil production, raising it as the market changes. To help offset the backlog, the province signed an agreement to lease 4,400 railcars to ship oil — enough to ship approximately 120,000 barrels a day — to bring production up and bring the oil curtailment to an end.

The province is working on diversifying the economy — both inside and outside the energy sector. The government had put aside $3.5 million for a Made-In-Alberta energy diversification plan that was launched in spring 2018, and from $1 billion In royalty incentives and loan guarantees, Mitchell said they have leveraged nearly $13 billion in new private sector refining and upgrade investments, creating 8,500 new jobs.

Other diversification initiatives include cutting the small business tax by a third, providing access to capital during the economic downturn to help businesses hire and expand, introducing tax credits for entrepreneurs and helping the Agrivalue Processing Business Incubator expand. While doing this, Mitchell said they are continuing to maintain Alberta’s $11 billion tax advantage over the next lowest taxed province, and the Conference Board of Canada forecasts a growth of 8.8 per cent for Alberta manufacturers in 2019. Alberta’s Climate Action Plan was also touted during the speech.

“Today, thanks to the Climate Leadership Plan, Alberta is the most sought-after market in Canada, if not on the entire continent, for renewable energy investments. By 2030, we will see 5,000 megawatts of green electricity generation, about $10 billion in new private investment and the creation of 7,000 jobs.”

Health care was a top priority in the speech, with Mitchell highlighting projects across the province that are or have been built.

“We will continue to stand up and say “No” to American-style health care. And we will keep our hospitals and health centres available to everyone who needs them.”

Mitchell announced that the government had met their commitment to build 2,000 long-term and dementia-care spaces, and are continuing to invest and expand health services.

Government would seek to strengthen education in the province, and are working to update the curriculum and support classrooms.

Additionally, government will seek to further support access to child care, after having introduced a $25-a-day child care pilot program, which has expanded to 7,300 spaces in 122 licensed child-care centres.

“But even still, child care is far too expensive for far too many women and families. That’s why, this year, your government will undertake a major new program to help young mothers and families save thousands of dollars and help make child care more affordable for everyone.”

Mitchell cited in the speech the work that government had done to reduce child poverty across the province, thanks to initiatives such as Alberta Child Benefit, the enhanced Alberta Family Employment Tax Credit, school nutrition programs and increasing the minimum wage.

“Statistics Canada recently reported that Alberta’s child poverty rate has been cut in half since 2015 and is now the lowest in the country. Forty-four thousand kids have been pulled out of poverty. That’s 44,000 kids who have safe housing, good food on the table and the means to afford warm mittens and parkas. Importantly, this poverty reduction work happened during the toughest recession in a generation. It happened because your government remained steadfast in our commitment to help people who need help the most.”

Concluding the speech, Mitchell pledged that government would continue to work to make the province more diversified, modern and resilient.

“With the priorities laid out in these remarks – restoring trust in government, creating good jobs in a more diversified economy, and defending the schools, hospitals and public services that workers and families rely upon – we can raise one another up, making sure we are all able to see that same hopeful and optimistic horizon. We stand as one, Albertans to our very core.”