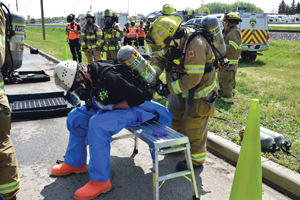 Practice makes perfect, and that’s no different when preparing for an emergency situation.

A mock train derailment exercise went in Coaldale on Tuesday, May 28, which saw emergency services crews acting out a possible derailment scenario in town.

“We were able to carry the incident basically right from start through to finish, which we really haven’t had an opportunity to carry out a full incident and get a full incident action plan developed previously. So it felt really good that we were actually able to carry out that entire process,” said Clayton Rutberg, deputy fire chief of public safety. “We had good communications and good work, between ourselves and CP Rail and the other stakeholders involved, to make sure that we were able to communicate properly with our different communication systems, and all that type of stuff.”

The exercise was put on by the Town of Coaldale in partnership with CP Rail, and saw Coaldale Emergency Services, CP Rail, Lethbridge Hazmat, RCMP, Coaldale District and Municipal Enforcement and Alberta Health Services and EMS responding to the mock incident. In the scenario they acted out, a semi-truck and train collision had take place at the Highway 3 and 845 intersection, which caused eight anhydrous ammonia rail cars to derail off the track. Four of those cars were leaking, and three of those had released into the atmosphere, with one contained but had a leak that the hazmat team had to contain and offload the cargo.

“I think the biggest thing is the intractability amongst the organizations that were there. Just the ability to work together to accomplish our incident objectives,” said Rutberg. “Everyone did really good.”

“It’s allowing both incident command in the field to have a very structure response, as well as communications being tested with their incident command post off site.” said Dustin Ritter, emergency response officer for CP Rail.

“It’s like any incident, be it a rail incident or a transportation incident or even a fire incident, it’s the amount of people around in the area, so heavily urban and populated areas are always a concern to everybody, comparative to an out of town incident where it’s in the middle of a field.”

Ritter said that CP Rail facilitates these exercises about 100 times a year throughout their network in North America.

“For CP, it’s an ability for us to showcase our resources that we have available if and when something should happen, and also it builds confidence with the local responders as well, to know that some expertise coming from the railway standpoint, so they’re not left alone to deal with an incident.”

Rutberg noted that in this scenario, they had focused on the response aspect of it, but in the future, he would like to work on the recovery aspect of an incident as well.

“I would like to see us expand in the future and continue on to do other recovery aspects,” said Rutberg.

“So, start to plan to bring people back into our homes. So, we would have done an evacuation (if the scenario was real), so we planned out that evacuation, so for us to start to plan out that recovery.”

The Town of Coaldale had performed a functional wildfire exercise last year, and they do table-tops and smaller-scale exercises annually, with a larger-scale exercise like the one last week once every few years. They also perform Emergency Operations Centre (ECO) activation training a few times a years, which has them work through a “small problem”.