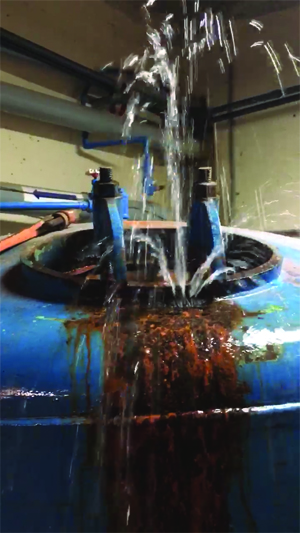 Sunny South photo submitted by the Town of Coaldale

The Town of Coaldale will be making other arrangements for swimmers after a mechanical failure forced the town’s pool to close.

On Saturday, July 13, the mechanical system of the Coaldale Swimming Pool experienced a critical failure involving a crack to its filtration system. Coaldale town staff discovered the crack during a routine inspection at 10 a.m. that morning, and closed the pool to prevent further damage. Although an attempt to repair the crack was made with the help of a journeyman welder, when the system was turned back on, the filter expanded in a manner that called into question its structural integrity. Discussions with pool repair contractors, consultants, town staff and Alberta Health Services determined that the pool’s mechanical system was past the point of what a temporary repair could provide, and the town would need to replace the filtration system, which would include alterations to other aspects of the pool’s mechanical systems, in order to reopen the pool. There was no risk to the public as a result of the mechanical failure.

In order to repair the mechanical system, a supplementary analysis conducted by Pinnacle Aquatic Group recommended a budget allowance of $190-260,000, not including engineering costs. The Coaldale pool was built in 1974, and over the years the town has prioritized and approved necessary maintenance and repairs based on health code and safety requirements.

In a special meeting on July 18, Coaldale town council unanimously passed a motion to not reopen the Coaldale outdoor pool again in 2019, and to defer discussion on the long-term future of Coaldale’s existing pool to a later date, after a series of community consultation sessions, and further, that council direct administration to proceed with implementing the busing shuttle program from Coaldale to an external site, utilizing the assistance of the Town’s lifeguards as quickly as possible.

“This is a tough situation,” said Coaldale Mayor Kim Craig in a press release.

“We never like to close down a facility mid-season, however, council felt that to invest $190,000 to $300,000 in repairs to a 47-year-old pool, under an extremely tight construction window, just so we have the chance of opening again the second or third week of August, isn’t worth the financial risk,” said Craig.

“Council didn’t want to make a potentially $300,000 decision just so that we could have the pool open for another two weeks near the end of August,” said Kalen Hastings, CAO for the town. “What they want is a bit more time to consult with the public on whether we should spend the money on the existing facility, so it could be open again in 2020, or whether money should be redirected to something new, and than keep the old facility closed for good. That’s the cross roads that the current facility is at.”

The town has partnered with the Village of Stirling and Palliser School Division to allow for use of a 70-passenger bus to transport pool-goers to the Stirling Swimming Pool. Although details are currently being finalized, the plan is the bus will depart the Coaldale Swimming Pool Parking lot at 1 p.m. Monday to Friday through to the end of August, depending on the Stirling pool schedule and lifeguard availability. The bus will return residents to the Coaldale Swimming Pool parking lot at 4:30 p.m. each day the service is operational. The Town of Coaldale hopes to begin the program no later than July 29, and more details of the program will be published on the town’s website and social media pages when available.

“The Stirling outdoor pool, waterslide and sun deck is one of the most popular and well used amenities in our community during the summer months. We’re pleased to support the Town of Coaldale and their kids aquatic programming by providing access to our pool facilities to ensure everyone gets the chance to make a splash,” said Stirling Mayor Trevor Lewington in a press release.

Coaldale lifeguards — who have been temporally reassigned other departments as a result of the pool closure — would chaperone the shuttle service and will be responsible for maintaining attendance of the shuttle users, including ensuring that no one is left behind, through a buddy system. They would have access to a telephone to contact parents or handle emergencies as required.

“We’re really appreciative of the Town of Stirling for making their facility available on short notice for Coaldale residents We are also appreciative to Palliser School Division on the provision of a bus, as well as the creativity shown by town staff, the pool lifeguards, on putting together a program where Coaldale youth — through supervision of the lifeguards — can attend the bus without a parent or a guardian, so they can go for a swim in the Village of Stirling,” said Hastings.

There will be no cost for residents to utilize the shuttle service. However unaccompanied minors would need their parents to fill out a permission slip in order to board the bus. The town plans to have permission slips available on the their website and at the pool on days when the shuttle is in service.

The Coaldale Public Pool will be closed for the remainder of 2019, and council will need to decide on whether to open the pool for 2020 by November, in order to ensure there is time to do repairs should they go that route. According to the town’s 2019-21 Capital Plan, which was approved in November 2018, the town had noted that the pool was nearing the end of it’s lifespan, and the town is currently exploring funding options to build a new pool and keep costs down, such as through private-public partnerships.

“The closure of the pool mid-season, it makes the decision making process of what’s next more immediate, simply because a plan needs to be put in place. If we’re going to be opening in 2020, we’re going to need to know that so we can get the repairs done before the start of the season,” said Hastings.

“We recognize that this is a tough situation. The pool gets a lot of use from the community, and there’s been some inconvenience for people. Ideally, it would have been nice if the pool could have lasted a few more years, but we’re trying to make the most of a tough situation, and I think the situation is going to help chart the next course in terms of how to proceed in the future, be it fixing up  the pool that we have, or looking at building something new, whatever that may look like.”