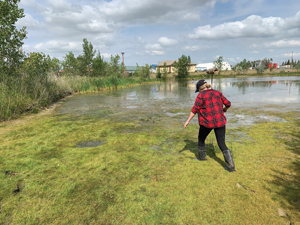 Although the report officially marked the end of the investigation into the bird deaths at the Birds of Prey Centre last summer, concerns are still being raised about the risk of west nile in the community.

One Coaldale resident, Liz Allen, expressed dissatisfaction over the report.

“I think it is extremely biased, and I don’t think all of the facts are presented properly,” said Allen.

“The town itself hired it; it’s like having somebody act as your lawyer. To me, they were putting the town in a better light than they were the Birds of Prey.”

As the Town of Coaldale supplies the water to that area, she said it was negligence on their part that allowed the west nile incident and the bird deaths to happen last summer.

Last month, a report was presented to Coaldale town council by Solstice Environmental Management regarding the investigation into the bird deaths at the Birds of Prey Centre in late summer 2018.

While the report said that the source of the transmission was inconclusive, due to the lack of testing of the nearby water bodies — as per Alberta Health Services recommendations at the time — it did make some recommendations, such as improving communications, bettering the storm water management of the lease ponds to reduce future risk of stagnation and potential mosquito production, implementing best management practices for raptor health management to help mitigate the risk of west nile for the birds at the centre and for the town to implement mosquito control measures.

A week after the report came out, Allen says that there are still issues with the storm ponds around the centre, west of Highway 845.

“The ponds are extremely low right now, and they’re thick with weeds and algae, and it’s just another storm of mosquito nests that are coming,” said Allen, adding bulrushes and weeds were also growing in the middle of the storm ponds.

“I was just walking around there (on Aug. 5), and I couldn’t believe how low it is.

“I thought they were going to raise the water levels, and not put us in this situation again.”

Allen lives nearby the Birds of Prey Centre, and has horses, who are susceptible to West Nile Virus.

This year, as of last Friday, only two cases have been reported from the Calgary area.

According to Alberta’s west nile surveillance webpage, both were non-neurological cases acquired from out-of-country travel.

Allen criticized the level of blame the report put on the centre, noting one part where it said that the centre had changed things at the site, which she disagreed with.

The report said that the presence of  three small ponds and two micro ponds pictured in recent aerial photography were not included in the original plans for the centre. She also disagreed with the report saying that west nile could have come from a ‘carrier’ bird that was admitted that summer.

“The bird deaths are completely tragic, and they made it sound like because they took in 100 rescue birds, that maybe they brought it with them, and that’s just not fair at all,” said Allen.

“Better to prevent the mosquitoes, take away their foundation where they can build a lovely big family, than wait until after the mosquitoes bite or get out into the community.

“We should be smarter by now. We should be more proactive. They say right there in the report that they keep the water fresh, and it’s anything but fresh.”

Kalen Hastings, town CAO,  said that the Town of Coaldale is in charge of maintaining the storm ponds adjacent to the Birds of Prey Centre as well as the Malloy Drain storm ponds. However, the town is not responsible for maintaining the ponds within the Birds of Prey Centre as that falls on the Centre itself. “Periods of excess heat, along with the presence of nutrients like phosphorous, correlate to excess weed and algae growth,” said Hastings.

“This is not unusual for this time of year, and is not a phenomenon that’s specific to the Town of Coaldale. As confirmed by Solstice Environmental Management, the more important considerations for disrupting mosquito breeding conditions are maintaining water depth, to control for temperature, and the presence of active flows, to keep water moving.”

The town has been monitoring its storm water ponds daily, and have been adding water to its storm system throughout the summer. Due to the hot temperatures, there has been a lot of evaporation, and they have used a significant amount of water from the irrigation district to maintain water depths and flows.

Hastings said that the purpose of the investigation wasn’t to assign blame, but more of how to prevent similar incidents in the future.

“The primary purpose of the investigative exercise was to identify and understand the fullness of the issue, so that we could move forward, both as an organization, as a community and working with the centre and other agencies involved, including Alberta Health Services, Alberta Environment, Birds of Prey Centre,” said Hastings.

“We want to make sure that we gain a full understanding of what happened, what the possible causes of west nile are, as well as the risk mitigations strategies that all affected parties can employ moving forward. So, the point of the exercise, the main point of the exercise, was to look at how to best move forward.”

Hastings said the town was pleased by the diligence and the toughness shown by the investigators, and the extensive literature review conducted as part of the report is helping to inform the town’s practices moving forward. The town will be contracting Solstice to assist them with implementing the recommendations in the report.

He also noted that one of motions council had made following the presentation of the report was hold a meeting with the Alberta Birds of Prey Foundation once they were closed for the season in September, as they wanted to make communication a top priority with the Birds of Prey Centre going forward.

The town has improved communication with the centre regarding the flow of water into the ponds they lease from the town.

The town will be improving messaging regarding water levels to residents, to explain what the intended water level for the infrastructure is and what is being done to reduce the risk of mosquito breeding grounds.

Additionally, in response to the prolonged heat wave, as part of a previously planned mitigation strategy, Hastings said the town will begin to apply a biological solution, BTI, a bacterial larvide, to the ponds adjacent to the Birds of Prey Center, and the ponds within the Malloy Phase 2a.

BTI is an effective and environmental friendly pesticide that effects the mosquitoes, as they have a basic stomach pH unlike most other non-target organisms, which makes it a safe option to use around other animals, and it dissipates from waterbodies after 24 hours leaving no residuals.

“We’re optimistic about the future, we’re excited to work with the Birds of Prey Foundation on how to move forward. We recognize that they are an excellent destination facility, and we want to work with them to help them be successful. We want to do our part at the local level, in reducing risk for west nile,” said Hastings.

“We recognize through the literature review done through the investigative process, that west nile is far bigger than any one municipality. It’s an unfortunate reality for southern Alberta, but we’re committed to doing our part to ensure that we have proper risk mitigation strategies in place and work with Alberta Health Service on an awareness campaign so residents can see what they can do at the individual level.”

If you have any concerns about the town storm ponds, or mosquito risks in areas under the town’s control, contact the town office at 403-345-1300.

To learn more about West Nile Virus and what precautions are necessary to reduce its risk, visit http://www.fightthebite.info.