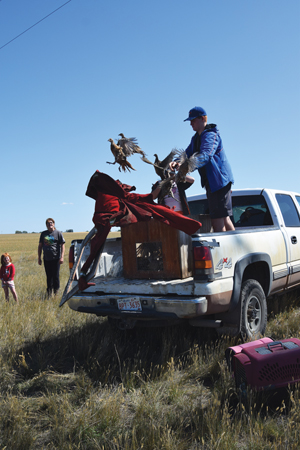 After months of hard work, 4-Hers were able to see their hard work fly away as their pheasant projects came to a close this year.

While it has been a difficult year due to storms, Clancy Holthe, assistant leader for TNT 4-H Multi Club said that they’ve had good release rates this year.

“The raise and release is not for hunting, it’s for reproduction. It’s for reintroducing the pheasants here into the wild,” said Holthe.

“There used to be thousands of pheasants in the area, and over the years, with farming practices and that, they’ve lost some of their habitat and there’s not as many around.”

Holthe said he was involved with the pheasant release program when he was in 4-H, however the program slowly died out.

In 2014, the Alberta Conservation Association partnered with 4-H clubs to reactivate the pheasant raise and release program.

“Essentially, in late May, everybody gets how many birds they ordered form a little hatchery in Wisconsin, and then you raise them inside your small enclosure, and you have a heat lamp on for the first month,”  said Nyles Clark, a member of the Lethbridge-Coaldale 4-H Beef Club, who just did his second project.

“You feed them and try to have as little human contact as possible until they are fully grown, and every year, at the end of August, we release them back to repopulate all of the different areas we released.”

One oddity about the birds the clubs had received this year was that there was a rather large amount of males, when normally its the opposite.

“Usually, the hatchery, they sex the chicks (before they send them out),” said Holthe.

“Usually in the past, we’ve probably gotten one rooster for every eight, nine or 10 hens. But this year, here, we’ve actually probably got just 50 per cent roosters or more.”

With the release of the pheasants, the project ends for the year. However, interested 4-Hers can participate in the project next year.