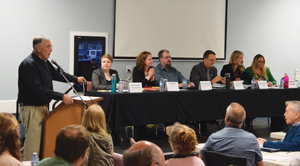 All six candidates for the federal Lethbridge Riding made their case to be elected last week in Picture Butte.

In a forum hosted by the Picture Butte and District Chamber of Commerce on Sept. 25, Marc Slingerland for the Christian Heritage Party, Rachael Harder for the Conservatives, Stephnie Watson for the Green Party, Amy Bronson for the Liberals, Shandi Bleiken for the NDP and Grant Hepworth for the People’s Party of Canada answered questions regarding topics such as the SNC Lavalin scandal, defence spending, child care, seniors, the justice system, health care, gun control and agriculture.

The majority of the questions came form the audience, but the lone question imposed by the forum moderator, John Kolk asked, as markets of Canada’s agriculture products were being closed in some countries, what their party intends to do to address that issue.

Watson noted that Canada has seen these closure come down the line for the last six years, and part of the issue is due to the way we grow our crops and the need for the certain crop.

“What we would need to do is collaborate with our farmers and our businesses, as well as internationally, and see if we need to be looking at transferring of our crops over, but also looking at different ways to manage our pesticides and insecticide applications, so that they are more marketable to a larger market,” said Watson.

Harder said the when we’re talking about markets being closed, we’re referring to India and China, and slammed prime minister Justin Trudeau’s trip to India, saying he spent seven days dressing up and taking pictures and only a few minutes with India’s president Narendra Modi, who she said probably expected more respect. She said there was a huge opportunity to build positive diplomatic relations for trade agreements, and a Conservative government has and will do it again.

Slingerland argued that when the problem occurs, it is already too late, and said the reasons why China acts the way it does towards Canada is because the federal government in the last few years will do anything as long as China isn’t upset with them. He said that Canada is unique because of its rule of law, but we need to stand proud on that all the time, and not stand down when pressured.

Hepworth said one of the issues Canada has with trade is that all our eggs are in one of two baskets.

“Under our (PPC) government, we would actually go way out of our way to find more and more markets for our products,” said Hepworth.

“Being restricted to places like China, places like India, these are very, very large economies with a lot of global power and they can literally dictate what they want from us. That’s problematic. We need to be able to get into markets that actually require our products, that are going to give us fair market value, and are not going to, on the whim of a political issue, use it against us when it comes to trying to negotiate trade.”

To deal with China, the Liberals have a three-pillar approach; engagement where they have accepted consultations with the World Trade Organization, interest-free financing for canola producers and expanding markets to other countries to diversify.

Bleiken said we need to get our products to market and ensure that farmers are compensation for their losses from Conservative and Liberal trade negotiations, and the NDP would defend agricultural products from unfair retaliation overseas. She said that we need to work with producers and increase the number of products sold and used in local areas, and voiced her excitement for a national school food program that would utilize local products.

One attendee asked what their views are on childcare, particularly for programs like daycare, pre-school and after-school programs.

Hepworth noted that his party does not have a specific policy when it comes to childcare, and they will be respecting the existing legislation and funding those programs without any changes.

His personal view was there should be more money put towards those programs, as there was a lot of people who fall through the cracks due to their financial situations. He said that regulations for daycares are too onerous, and they need to be more common-sense based.

Slingerland said that the best people to raise a child were their own parents, and said that most parents say that given the choice economically, they would prefer it too.

“The fundamental approach has to be how to make that possible. Certainly, we need to have infrastructure in place — maybe we’ll have a chance to talk about our infrastructure funding — for those for whom it’s not possible, but starting with tax reform so work in the home, caring for children, caring equally for disabled relatives or elderly parents, is not undervalued. That’s a key essential part of our economy, which right is given basically no value what-so-ever,” said Slingerland. “Recognizing that through tax law, through income-splitting and other means so that families can raise their own children according to the dictates of their conscience, is where we should start, and then support other options for those who need them.”

Harder believed that parts of the conversation have to do with choice, autonomy, independence and the functioning of a family unit. Ultimately, it should be left up to parents how a family is structured and functions on a day-to-day basis.

She said that under former-prime minister Steven Harper, he had made the decision to put in the universal childcare benefit, and she gave kudos to the current government for continuing it. She said we need to look at tax reforms, and claimed that families were paying half their income on tax and it wasn’t fair.

Watson said that we needed a basic income level to help deal with poverty issues, noting that it was preventing a lot of parents from staying home to raise their kids or from affording the childcare they need, as well as extending parental leave.

They said they need to increase funding for that, and they plan to do that by eliminating GST on all construction costs related to child care spaces.

Bleiken said that families are spending almost a quarter of their income or more on childcare costs, and it was absolutely unacceptable.

“The NDP is committed to a universal, high quality, public, affordable childcare program across Canada, and we’re committed to listening to communities and making sure that it works, that we’re tailoring it to what works for each community,” said Bleiken.

“Because what Picture Butte needs is going to be very different than what Lethbridge needs. But we’re committed to putting the funding there, and putting the money into the hands of the people who will be caring for the children in our communities, because that will give the flexibility to families to do what they need to do. If you want to work, you can go back to work, and you shouldn’t be prevented from doing that just because you don’t have access to adequate childcare.”

Bronson said she believed in income-tested benefits, which is a core view of the government, where those with lower income would receive proportionally more of what they need. She said the Canada Child Benefit that has come in affects 24,000 children in the Lethbridge riding, put $8 million back into the economy and reduces the taxes of those families.

The Liberal Party has also announced enhanced benefits and a guaranteed paid family leave for those who are not in formal employment in their election promises.

One attendee asked candidates what their party’s government would do to enforce laws against irresponsible gun use, as he said people who commit those crimes get a slap on the wrist and then go home and do it again.

Hepworth said the penalties that existed in Canada in his perspective are mostly a joke, as you can commit a crime, spend time in a community jail before being sentenced to go to jail, and before your court case is heard you could have served most of your time before you are even sentenced, or even have served all of your time, and that wasn’t justice, and said that we need to look at the judicial code, examine current laws and increase and put in place minimal penalties.

Bronson said she thought border security was very important, and criticized the previous Harper government for cutting border security, which she said was restored.

“As we’ve gone through the opiod crisis, specifically enhancing funding to stop illegal activities related to the opiod crisis going over the border, that’s important and we need to continue to do that, it’s not, it shouldn’t be a partisan question about funding our borders for those risks,” said Bronson.

Bleiken urged people to email her campaign for an answer, as she couldn’t give out any specific answer then. However, she said the NDP were committed to ensuring that everyone in the country is taken care of in a compassionate way and everyone has access to the services they deserve.

Watson said the Green party would create a buy-back program that would allow people to trade in their guns without fear of persecution, and they have a problem with just throwing people in jail without helping them rebuild or find other alternatives, arguing that we have tried the crime and punishment thing and it doesn’t work, and what we needed was education, compassion and alternatives.

Harder said that when Trudeau announced he was going to allow municipalities to ban handguns, the Canadian Association of Chiefs of Police came out against it and said it would do nothing to combat crime.

“At the end of the day, there are two things that are needed here; one, greater border security, we need to reenforce our borders and make sure that guns are not coming illegally across those borders. Number two, we need to reenforce our policing and give the front lines the resources that they need in order to tackle gang violence, in order to tackle gun violence, in order to make sure that we’re taking these individuals off the street, in order to create a better community, a safer community, for Canadians,” said Harder.

The federal election will take place on Oct. 21, with advance polls going Oct. 11-14. People can register to vote or update their personal information by going to elections.ca. All voters will require photo ID on election day.

Those who have not pre-registered to vote can still do so by presenting photo identification and proof of current address to their local polling station.