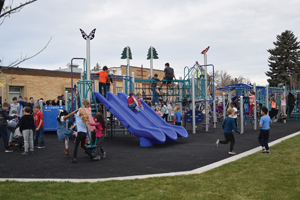 On Friday, Oct 25, the school held the blessing and ribbon cutting ceremony for the new playground. While kids have been playing on it for the past two months, the ceremony was held to thank everyone who had contributed to and helped make the playground a reality.

Ken Sampson, Holy Spirit School deputy superintendent, said growing up he was very into sports, and one of his favourite times of day was recess. However, his school’s playground only had a merry-go-round for playground equipment.

“We had to make games because we didn’t have a lot of equipment. You guys are so lucky. When I look at the playground that’s out here, it’s very different than when my children went to school, but you guys have the best, the best state-of-the-art, 21st century playground equipment, in this beautiful community,” said Sampson. “None of this would have been possible with out the hard work, the blood, sweat and tears so to speak, from all the teachers, the parents, the community members, all the different stakeholders that played a part in taking this from an idea to an actual playground.”

Three years ago, the Friends of St. Joseph’s School began the project to upgrade the school’s existing playground. The new playground would cost about $287,000 for equipment and rubber matting. The school received about $100,000 worth of in-kind donations from various local businesses and organizations, and volunteers put in about 1,000 hours of work.

They also received grants from the Coaldale Kinsmen, Coaldale Kinettes, Lethbridge County, Town of Coaldale, the Coaldale Wellness Association, Alberta Recycling and Alberta Culture and Tourism. Friends of St. Joseph had also raised over $50,000 for the project

“In the beginning, we sat down and figured out that we would need to sell over 500,000 cupcakes at 50 cents a cupcake to fund the project,” said Val Leahy, a member of Friends of St. Joseph. “The new playground is fantastic, especially the teepee and Mt. Everest that Sheryl-Ann (Giacchetta, chair of Friends of St. Joseph School) and I personally worked on. When you go out there, play on the teepee and Mt. Everest.”

Partway through the project, they decided to add rubber matting to the project, which had added about $100,000 to the total price tag. Leahy said they were glad they made the decision and thanked everyone involved.

The school’s old playground was built in 2003, but was not accessible and was small. To help accommodate their growing student body and make it fun for everyone, the school expanded the playground and added other components. Construction had taken place over the past summer to allow it to be completed in time for the 2019/20 school year.

“It’s important to have these type of facilities in our community,” said Roger Hohm, Coaldale town councillor. “I just want to say thanks to St. Joe’s for doing all the fundraising, it’s a great place for our community, it’s important to it. Kids: certainly enjoy it, play safe and have a wonderful time on this brand new playground that you’ve got.”

“These upgrades will help create and even better, safer place to play,” said Tory Campbell, Lethbridge County councillor. “It is our hope that this playground will provide enjoyment for students for years to come.”