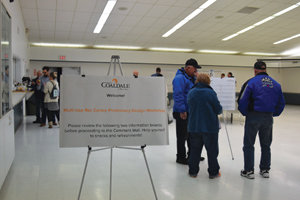 Coaldale residents are able to weigh in on what will go into the proposed multi-use recreation centre.

At an open house held on Oct. 30 at the Coaldale Community Centre, attendees were able to share their thoughts on what will go in the rec centre. Another open house will be held on Nov. 5 to give those who couldn’t attend the one the previous week a chance to share their views.

“The goal of these open houses is twofold,” said Spencer Croil, director of planning and community development for the Town of Coaldale. “The first goal is to share feedback that’s been collected from the user groups we’ve been able to meet with so far, regarding the features and amenities that are desired for the new facility. The second goal is to gain community insights regarding what features and amenities are desired for the new facility.”

“At this phase of the project the Town is looking for ideas regarding the amenities and features the community wishes to have included in the facility.”

Currently, the town is on Phase 2 of the rec centre project — the first of a series of community consultations on what should go in and around the facility. In Phase 1, the town and Palliser Regional School Division had selected FWBA Architects following a formal request for proposal process for the preliminary design of the school and rec centre, which would located on the same property once built.

In Phase 3, an analysis and summarization of feedback collected from Phase 2 will take place, followed by brining the summary of findings back to the community for more detailed discussions. In Phase 4, the final series of preliminary design consultations with the community will take place, and will include a refined list of amenities and features that the community wishes to be part of the facility, along with costs and priority associated with them.

“Having costs and priority ranking assigned, through community input, to each amenity and feature that is discussed here will help to ensure the project remains on-budget and meets the needs of the community,” said Croil.

“It’s also important to note that those amenities and features that may not be able to be included in the initial construction of the multi-use facility will be kept on a roster of ideas that can be implemented as funding becomes available in the future.”

Phase 3 is expected to take place in November, with Phase 4 to shortly follow.

Phase 5 will be the transition from preliminary design to detailed design, and is where the ideas that have been refined and costed out from the previous phases can be included in detailed architectural plans that will be developed for the facility.

At this phase, rendering of what the facility would look like, depending on what does in it, will be available.

Phase 6 is the preparation and release of an RFP for the construction of the facility. As is standard practice, the RFP will be posted on the Alberta Purchasing Connection website.

The town has budgeted an estimated $10 million for the recreation facility, despite only now holding consultations on what will go in it.

Croil says that assigning a budget for facilities such as this is “not an uncommon practice”.

“By setting the budget available for the project ahead of having all of the details regarding the specific amenities and features to be included, the town is able to work with the community to consider all desired amenities and features, and include as many of the most desired elements as possible, within the budget that’s been assigned,” said Croil.

“This approach allows for the town to maintain the approved budget and take a flexible approach regarding the details of the facility’s design. It is helpful that many other communities across the province have built similar facilities relatively recently, and the town is able to assign a budget for a facility such as this based on the fact that although other facilities were built in different areas of the province, with a build of this size and type, the bidding process is required to be open to companies across the country, so the cost of a project like this in Coaldale is very likely to be similar to the cost of similar projects completed elsewhere in Alberta, controlling for variables such as current-year materials and labour costs, which tend to fluctuate based on broader economic conditions.“

One unique feature of the rec complex is that a new high school is also being planned for the same site.

Croil said a benefit of working with FWBA Architects s that they have designed many educational and institutional facilities in southern Alberta, so they have a deep understanding of the context of the partnership between Palliser and the town.

“There are obvious benefits to joining the two facilities such as being able to share in the areas required for parking, storm drainage, utilities, and so on.”

The next open house for the recreation centre will take place on Nov. 5, from 7-9 p.m. at the Coaldale Community Centre.