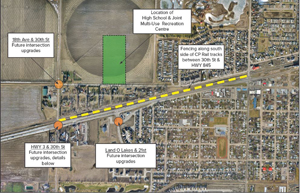 Sunny South Graphic submitted by the Town of Coaldale

A Coaldale resident is calling for the town to do a plebiscite on the location of the proposed joint high school/rec centre.

“My concern is that they still haven’t thought it out enough,” said Liz Allen. “I thought it was for the great opportunity for the town to look at this again. They have all the time in the word to look at a different site. I’m hearing from just about everybody I talk to that this is such a stupid idea, to have it on the north side of the tracks.”

In a letter dated Jan. 6, addressed to town council that Allen delivered to the town office, she asks for Coaldale town council to hold a plebiscite asking their citizens whether they would support the proposed northwest location for the joint high school/rec centre or a site located south of Highway 3.

The town’s decision to pursue the northwest location for the new Palliser Regional School Division high school, known as Site A, had been met with controversy with people concerned about traffic, safety and lack of public consultation. These concerns had prompted a 600-page report and presentation from town staff, Coaldale Emergency Services, CP Rail and the RCMP in June 2019 detailing why the site was selected and safety measures that would be put in place. While the matter is “definitely old news”, as they are in the early design phases for the rec centre, Allen argued that the town has time to do the plebiscite.

Allen had reached out to the Coaldale and District Chamber of Commerce, and they issued a letter of support for the plebiscite after approving motion to do so at their Jan. 8 meeting, which was sent to town council. The motion passed by the chamber did not have the chamber taking a position with respect to the plebiscite itself.

“They’re building it in middle of a field with all the schools and 80 per cent of the population being on the other side of the highway, they have time to hold a plebiscite and gain that confidence from the population, citizens in the town.”

Mayor Kim Craig said that the town will not be considering a plebiscite on the location of the joint high school/rec centre.

“Council will not be holding a plebiscite to determine the location of the joint high school / multi-use recreation centre. Council has made a number of resolutions over the past two years that have clearly signalled council’s desire to proceed with and execute the joint project as originally planned and approved for the northwest side of Coaldale. Thousands of hours have been collectively invested into the planning, feasibility, due diligence and site readiness measures of this project. In our view, the best site for Coaldale was selected; as a council, we remain steadfast on that point,” said Craig.

“To change locations would effectively withdraw our request for a school project from the provincial queue, causing unnecessary and added delay to the approval timeline of a much-needed community project, a project that was very well received by the province. Coaldale town council is not prepared to undertake any steps that add unnecessary delays to a collaborative project that has outstanding merits.”

“As a council, we are no longer going to expend resources talking about ‘the where’; we are going to concentrate instead on project execution,” said Craig.

Craig said that the town has reviewed their efforts and project readiness measures with Alberta Education and Alberta Infrastructure, had participated in a two-day value scoping — or school project readiness — session that was hosted by an independent consultant hired by the province in October 2018, and had commissioned an independent report by BDO Canada LLP, which had highlighted the economic development merits of the project site selected.

“With respect to citizen engagement, we have undertaken considerable effort to hear out those who were concerned about the location that was selected for the joint project. While we value community feedback, and have participated in a number of consultation sessions, we will not have our council meetings and strategic mandate co-opted by those that want us to continually revisit decisions that have been made following due process and extensive due diligence measures,” said Craig. “Everyone is entitled to their opinions. But it is not realistic for municipal councils to rehash the same issue over and over again. If this were the case, very little would ever get done. We have been very open and public with what we have been working on. Never before have we spent more time and resources planning, researching and preparing for a capital project. We are confident in the feasibility work we have undergone.”

According to the Municipal Government Act, there are two ways in which a town can do a plebiscite. The first, in Section 236(1), states that “(1) A council may provide for the submission of a question to be voted on by the electors on any matter over which the municipality has jurisdiction. (2) A vote of the electors under subsection (1) does not bind council.”

The second way a plebiscite can take place is when a petition, in Section 232(1), “Electors may petition for (a) a new bylaw, or (b) a bylaw to amend or repeal a bylaw or resolutions on any matter with the jurisdiction of the council under this or another enactment.”

However, according to Section 231(4), such a petition would need to be filed with a municipality within 60 days after the last date on which a proposed bylaw or resolution was made/adopted. In this case, the last motion was made on June 10, 2019, when council passed a motion to uphold the Joint High School (grades 7-12) / Multi-Use Recreation Facility project site that was approved in the 2019-2021 Capital Budget, and to direct administration to take steps to proceed with the following: design and construction of the Multi-Use Recreation Centre on the southeast portion of the Town-owned parcel of land legally described as SW 15-9-20 W4 (subdivisions 3 and 6); continued collaboration with Alberta Transportation and CP Rail on the design and construction of a fully signalized intersection at the intersection of HWY 3 and 30th Street, as well as the installation of a safety fence along the HWY 3 corridor; design and construction of paved and detached pathways along 30th Street, 18th Avenue and 16th Avenue, as well as the addition of at-grade pedestrian crossing improvements; further, that council direct administration to undertake, in tandem with Palliser Regional School Division and the town’s architectural design consultants, community consultation initiatives to determine the amenities to be included in the multi-use recreation facility.

Council has also previously declined to consider a plebiscite request regarding the location in a letter during their June 24 meeting, and instead passed a motion to receive the letter as information. Craig said the town is currently preparing a formal reply to Allen’s letter, but it was not included in either of the January 2020 council meeting agendas because they already declined a similar request and have made their position clear on the matter.

Craig noted that the community has a “significant school space shortage”, and the new high school, in addition to replacing an aging building, would help alleviate this problem by allowing for grade redistribution throughout all Palliser schools in Coaldale.  The new school will be grades 7-12, with Jennie Emery Elementary becoming Kindergarten to grade 3, and R.I. Baker Middle School becoming grades 4 to 6.

Currently, Palliser and the town are in the conceptual/schematic design process for the joint facility, and have been working with the community, the sport and recreation working group and their architectural design consultants, FWBA, to develop the layout of the multi-use recreation facility. The town continues to work with Alberta Transportation and CP Rail on safety infrastructure enhancements along Highway 3, to help accommodate growth on both sides of the highway.

These measures include signal lights and intersectional improvements to the intersection of Highway 3 and 30th Street, the installation of fencing along the Highway 3 corridor from 30th Street to Highway 845, working with Alberta Transportation to lower stretches of the Highway 3 speed limit to 50 km/hr from 70 km/hr, upgrades to the intersection of Land O Lakes Drive and 21st Street and 18th Ave and 30th Street to improve traffic management and safety, widening of 30th Street and 18th Ave to improve traffic management, pursuing federal grant dollars to install a separate grade crossing for pedestrians to separate pedestrians and automobiles and continuing to work with CP Rail and Transport Canada to obtain grant funds to improve connectivity between both sides of Highway 3.

“In order to accommodate growth on both sides of highway 3, these transportation safety upgrades are required. The Joint High School/Rec Centre just happens to be the first large project taking place within one of the newly annexed areas on the west end of Coaldale.”