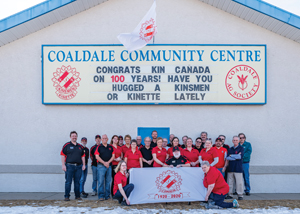 Coaldale Mayor Kim Craig proclaimed the week of Feb. 16-22 as Kin Canada Week, and Feb. 20 to be Kin Canada Day.

The proclamation aims to recognize the impact the local Kinsmen and Kinettes have made on the town over the years.

The clubs had taken part in a Canada-wide flag raising celebration for the service organization’s 100th anniversary on Saturday, Feb. 22.

“It’s a great honour,” said Douglas Page, president of the Coaldale Kinsmen, of taking part in the anniversary.

“Celebrating 100 years for anyone or anything is a pretty big milestone. It shows the strength of the clubs.”

“We’re all very proud to be part of such a long-standing organization whose local clubs do so much good for the communities we serve,” said Martha Van Buuren, president of the Coaldale Kinettes.

Over the years,  the service clubs have ran events such as the events such as the Carnage in Coaldale, Fun Casino Night and Kinette Christmas Shoppe, and some of the local projects they have undertaken include building playgrounds, the Kin Spray Park, the Community Centre, Kin Picnic Shelter, literacy programs such as  Literacy Backpacks and the Bikes for Books campaign, and supporting the Coaldale Food Bank, and they have raised more than $6 million to put back into the community.

“Kinsmen in general, what we like to do is serve our community’s greatest need — that’s our motto,” said Page.

“It means we’re giving back to the community in the ways that are required or best served based on the time of the year and the year that we’re in. It might be building parks for kids, it might be building a community centre or picnic shelter, it might be supporting Fun Runs or other clubs like the scouts and putting on some entertainment, some good old fun for the community, like the demolition derby and mud bog that we’ve had over the years.”

“We are a group of community minded women, dedicated to helping in areas where we’re needed most,” said Van Buuren. “We support many different areas and programs, everything from the Coaldale Food Bank to free public skating and minor sports associations and teams. We are very committed to helping groups like children and seniors, to provide them with programs and services they need to enhance their lives.

“We are part of this great club so that we can give back to the community that gives all of us so much. There is so much need for groups like ours to help support the things that make a community great. Without all of these programs, like minor sports, activities for seniors, literacy programs, facilities for people to be active, the people of Coaldale would miss out, and have to find them elsewhere. We’re proud to be able to help out in this way.”

One historic program is the Milk for Britain campaign during WWII, where they sent milk to Britian because their supply of milk was cut off. By the end of the campaign, which ran 1941-48, the organization raised almost $3 million and sent 50 million quarts of milk to Britain.

“Kin Canada was able get milk to the kids, get milk to the wounded soldiers, so it was actually quite the campaign,” said Page. “During that time, we did so much for them, our way of giving back to them, while also supporting the communities in Canada.”

Nationally, they have supported the Canadian Blood Services, Cystic Fibrosis Canada, for which they have raised over $47 million for CF research and patient care, run the Kin Organ and Tissue Awareness Campaign, formerly known as the Kin Organ Donation Awareness Campaign, the Kin Canada Bursaries program in which $1,019,000 has been awarded to 1,019 students across Canada since it was started in 1994, and STARS Air Ambulance.

Celebrations will go throughout the year with the clubs taking part in participating in National Day of KINdness, planting trees, supporting school milk programs and engaging youth in the Kin 100 Community Challenge.