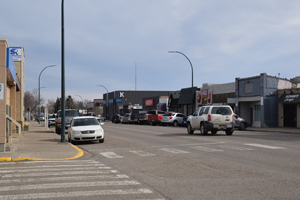 With the design now finalized, the tender package will go out later this month, with the tender being awarded in mid-April and construction scheduled to start in May.

“The primary reason the project was initiated almost a decade ago was because the sanitary sewer and potable water lines along the three blocks of 20th Avenue, aka Main Street, between Highway 845 and 17th Street were in need of replacement, and there is currently no piped stormwater service along these three blocks. Replacing the sanitary and piped water and introducing stormwater infrastructure will significantly enhance service for the area. At the street level, several sections of the road and the sidewalks are at or past the end of their lifecycle. Where the revitalization opportunity comes in is through the need to dig into the street to replace deep services and add in the stormwater system.”

As the town needs to dig up the street in order to replace the existing infrastructure, it gives the town the opportunity to improve streetscape elements — such as sidewalks, roadways, furnishings and planting — in one full swoop, rather than one bit at a time.

During the project, deep service upgrades include replacing the sanitary sewer and potable water sewer lines and introducing a piped storm water system to the area.

At the street level, sidewalks and asphalt will be replaced. Additionally, a number of streetscape elements, such as new benches, waste receptacles, trees, landscaping, lighting and pedestrians crossings, will be completed as well.

The first phase of the project work will be focused on preparing the site for excavation and deep services work, with the excavation and replacement of service lines planned to take place in three phases, with one phase per block.

“Each of the ‘block-by-block’ phases will also include the replacement of service lines, backfilling excavated areas, the preparation of road and sidewalk subgrade, the replacement of sidewalks and the installation of the new street trees and light standards. Once concrete has cured sufficiently street furniture will be installed and the ground-level landscaping will be completed.”

When all three blocks have been rebuilt, the final phase of the project will have the new asphalt laid from 17th Avenue to Highway.

The construction phases of the project will go from May to early fall, although Croil cautioned that weather may affect the project’s timing.

As the area of construction is home to much-traveled area of Coaldale, the town is focussing on ensuring access to properties and businesses along Main Street during construction.

“The town is requiring that the successful bidder communicate directly with business and property owners ahead of construction to ensure that construction scheduling can accommodate the stakeholders needs as much as possible.

“With a project like this there is always the potential for circumstances to arise that result in a need for short term loss of service, however steps are being taken to mitigate this as much as possible,” said Croil.

“With open excavation on the roadway, and the removal of sidewalks, it’s inevitable that there will be some impact to drivers and pedestrians. However, there are construction methods the contractor will be required to use that should allow for continued access to both sides of the street for pedestrians. Although parking will be impacted in the short term, one of the benefits of completing the work block-by-block is that the disruptions that do occur will be relatively short-term and will be localized to each block as the work is done.”

Ultimately, while the project will deliver on much needed infrastructure upgrades, Croil says the goal of the project  is to create a more comfortable, enjoyable experience for people in Coaldale’s downtown area.

“Rejuvenating the downtown area is something that council has identified as a top priority. The community has indicated rejuvenating the downtown is important several times in recent years. The deep and surface infrastructure needs to be replaced because of its age and condition,” said Croil.“This project will achieve a strategic priority of council’s and the community’s and the timing is right to bring new infrastructure into the area. The downtown really is the heart of the community and we’re excited to ensure it will function well and accommodate existing businesses and organizations for years to come, while also welcoming and encouraging new growth in the area too.”