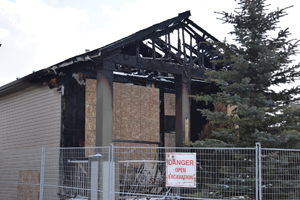 A Coaldale family is thanking the community after receiving tremendous support after a fire tore through their home last week.

Around 5 a.m. on Monday, March 30, Amanda Orsten had woke up to her smoke alarms going off and to a strange smell. Her boyfriend went out into the hallway to discover the house was filled with smoke. All the occupants in the home were able to evacuate and safely leave the house.

A neighbour had called 9-1-1, with the Coaldale and District Emergency Services receiving a call at 5:38 a.m. of a fire in the Parkside neighbourhood. Orsten, her boyfriend and her two dogs — the only occupants in the home at the time — were given shelter at a neighbour’s place while firefighters worked to put out the fire.

Upon the firefighter’s arrival, they were met with heavy fire conditions, with flames coming up from the front of the house and the roof. The fire department used a ground monitor, several handlines and an elevated master stream to bring the fire under control.

The 16 firefighters were able to bring the fire under control in 37 minutes, with two neighbouring houses receiving only minor damage. The cause of the fire is still under investigation as of press time.

Orsten noted that while the fire-fighters had arrived very quickly, for her, it “felt like hours”, because of the stress she was under at the time.

Orsten’s son, Ryker, as not in the home at the time. Orsten works in the health industry and has a masters in social work, and her job requires her to be out of the house, so he had been staying with her mom.

“It made the most sense, given the school closures and my inability to be at home, because I’m a single parent, that my son stay with my mom, to be able to do his schooling from home, and she has the ability to also work from home. So basically, we had strategize with our family that, I would be the one who would be able to go out, get the groceries and that, so that my son and my mom stay contained to the home, so if I came into contact with anything, it wasn’t being spread to them.”

Orsten says she is thankful that her son was not in the house at the time, especially as his room was destroyed by the fire.

“His room was the first place to become fully engulfed, and it’s that part of the home actually, well nothing from in the home is saveable, but in terms of being completely burnt from the flames, it’s my son’s bedroom. So I’m s thankful in the weirdest way that the pandemic of (COVID-19) was a saving grace for the fact that my son was not with me and was not in the home.”

Significant damage had been done to the house, with an estimated lost of $250,000, and nothing was salvageable. Orsten said her boyfriend had the presence of mind to grab her purse and his bag from the home when they evacuated, but other than that, they had lost everything in the house.

“The emotions and the feelings come in roller coaster rides,” said Orsten. “Everybody around is just helping us to heal, and I’m so thankful for that.”

The Coaldale Minor Hockey Association had launched a GoFundMe page fundraiser for her family after the fire, and it quickly surpassed it’s targeted goal within days of the incident. People have also been giving her things such as donated clothes, with the Coaldale fire department acting as a drop off point for donations.

“I’m absolutely grateful and thankful for everything that everybody has put in, to the time get that page up and going to being able to get me some funds to be able to start rebuilding with,” said Orsten.

“One of the things with the Gofundme page, the raising of the money is unbelievable and remarkable, but they came together to do so much more than the money that’s seen on that page.”

With the ongoing pandemic, it has put a “twist” in their experience, as most stores are closed currently so they can’t just go out and shop for replacement items such as clothing, and online orders take time, especially with the additional pressure put onto those systems from the outbreak.

In addition to the Gofundme page, people have been donating items such as clothing to the family, with the fire department acting as a drop off point for donations and making sure they got to her family.

Orsten says the actions of the community, especially during a time of social distancing, have spoken volumes about their ability to come together.

“Thinking about what is it that I need, comes with realizing what is in there and what is gone, and that has taken some time, and I don’t think I’ve fully gotten there yet, and that will be a journey of it’s own,” said Orsten.

“But people that took on the task of saying, this is something they could probably use and donating it, and the fire department delivering that to where I was in Coaldale and where my family is and making sure I got it, in a very, very kindly way. It was immediately that I was receiving donations and clothes, and in terms of rebuilding the physical aspects of our lives, the way that the community came together for us, you know, is transforming the way my son and I are able to heal and grieve and cope with this loss, and that is something that I couldn’t have asked for, and the community has done that for me, where with this entire experience, I don’t feel alone. In fact, I feel more connected and more like Coaldale is my home than I could have ever, ever figured out.

“I am so proud to be a resident of Coaldale, and I am so proud to be a member of Coaldale Minor Hockey, and I am so proud to know that we have such amazing firefighters at our Coaldale fire department, and I’m so proud of the organizations and the closely-knit aspects of our small community that truly make everybody feel like family to us now. And to the entire community, whether it’s people who have donated that I know and there’s a name to or the people that I’m not aware have donated because they’re maybe more anonymous, I see that, and I’m so incredibly grateful and thankful that I chose Coaldale to be our home.”