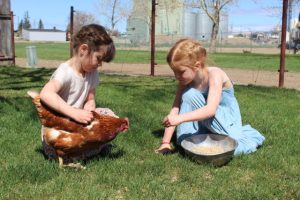 By Nikki Jamieson
Sunny South News
A recent petition to allow for backyard hens in Picture Butte has been deemed insufficient.

During their regular May 25 meeting, Picture Butte town council received the results of a recent petition to amend the town’s Animal Regulation bylaw to allow for residents to keep a flock of no larger than eight hens.

According to the Municipal Government Act, section 223(1) states that a petition most be signed by the required number of petitioners, and section 223(2a) states that “in the case of a municipality other than a summer village, by electors of the municipality equal in number to at least 10 per cent of the population”.

According to the town’s procedural bylaw, section 6.19 states that “Where a matter has been considered by Council and dealt with in any final form, no letter, petition, Delegation or other communication on substantively the same matter shall be considered by Council until there has been a lapse of at least six (6) months from the date Council previously disposed of the matter”.

Section 6.20 of the Procedural bylaw states that “Notwithstanding section 6.19, Council, by approving a Special Motion, may again consider a matter at a time earlier than 6 (six) months.” A Special Motion is a motion or resolution passed by two-thirds majority of all members.

Council passed a motion to receive and file the CAO’s petition sufficiency report regarding the petition received on May 11, 2020, requesting an amendment to Bylaw 815-16, the Animal Regulation Bylaw.