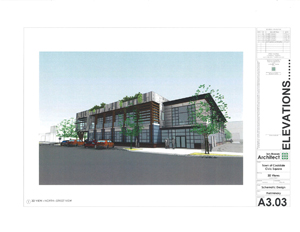 A group of Coaldale residents have raised concerns about the cost and transparency around the town’s Civic Square project.

Citizens for a Better Coaldale, a group of Coaldale residents who want to support and encourage ongoing constructive dialogue between the town and residents, have issues with the perceived secrecy behind the approximately $3-3.5 million project, which would see a new town office and business space in a two-story office building on 20th Avenue next to the Coaldale Public Library.

“There has been no public input,” said Jason Beekman, a spokesperson for the group. “When we talk about capital projects, and fulfilling the needs of what the citizens want, a new glamorous town hall is definitely at the bottom of everybody’s list.”

Although the original budget for the project was approved in the town’s 2019 three-year budget, he says the only information he’s found from the town are from budget documents, and not in any town council meeting. The town has said they are not releasing any detailed information on the project until later this summer, as it involves a third party developer.

“To me, that’s not constructive and meaningful conversation with the town’s people,” said Beekman. “I definitely feel when you are spending this much money, in a capital investment, the taxpayers should have a little bit of say in where their money is going.”

Beekman says they should have held proper consultation sessions with residents, and compared this situation to the controversial proposed rec centre/high school location, where the town had decided on the location without seeking input from residents. The location was chosen without public consultation to take advantage of a Value Management session from the province, in hopes of getting an earlier funding announcement for the school, only to be met with ire from residents concerned with the site’s safety.

In March, town council decided to have a developer/proponent undertake the Civic Square Project, which reduced the cost of the project from $8.6 million to $3-3.5 million. Beekman questioned how the town achieved those numbers and what is included in it. He also doesn’t understand why the town did not decide to publicly announce that information.

“They’re very quick to pat themselves on the back for everything else, I cannot understand why, if they were able to successful knock that project number down for the complete project, why they didn’t come and sing that off a rooftop.”

As there are a number of major projects for the town already underway, Beekman says it raises questions on how the town will pay for it, and says the members of the next council will look like the bad guys when they have to raise taxes to pay for it all.

A letter from Citizens for a Better Coaldale, signed by Beekman, had gone before Coaldale town council during their regular July 13 meeting. The letter outlined concerns on the Civic Square project, such as the apparent price tag attached to the project, lack of public consultation on it, it’s affect on town taxes and finances, and an overall lack of transparency when it comes to major projects, and requested that the town hold a plebiscite on the project and put capital projects on hold until there is full disclosure and approval from the town’s taxpayers.

While initially, the letter was going to just be received for information, after discussion council had unanimously passed a motion to invite the group for a meeting to talk about the project and the transparency the process had, after the details for the project were finalized, during a September council meeting, and declined the request for a plebiscite and a stoppage to all capital projects.

Beekman said that council criticized the group during the meeting from what they said the costs associated with the project were, but the numbers in the letter to council were what they had taken from the town’s 2019-21 Capital Budget.

While the group would love to meet with town council, they have an issue with it taking place in September, after the project details were finalized.

“We’re asking for consultation, transparency on the project, so if there is any changes, anything we can do to make sure this gets done right, let’s have those talks before they do an saddle us with this debt, because once the shovel goes in the ground, it’s very hard to turn back.”

Craig said that all council resolutions pertaining to the Civic Square project were made in open session and published in the official council minutes, and information on the project was published in the town’s 2019-21 Capital Budget, a Request for Proposal for Architectural design services posted on the Alberta Purchasing connection, a presentation to the Coaldale and District Chamber of Commerce in June 2019, a Request for Expression of Interest document soliciting private investment in December 2019 and in resolutions published in town council’s official minutes.

According to the minutes of council’s regular Dec. 9, 2019, and March 23, 2020 meeting, discussions for the items relating to the Civic Square Project were conducted in closed session. Resolutions cannot be passed during closed sessions of council meeting.

“As has been the case since November 26, 2018, when the town’s Civic Square project first became public, the budget for the town office space within the multi-use Civic Square complex has been $3.5 million,” said Craig. “What’s changed with respect to the Civic Square project is the business plan or approach that council approved to carry out the project. Indeed, instead of building and leasing out and/or selling additional commercial space within the Civic Square building to new businesses, council decided to let the private development community look after that portion of the project such that the town’s role in the project was minimized to simply purchasing a second story commercial condo from a private developer.”

As the precise contractual details between the town and the selected proponent are not finalized, they are unable to provide such details to the public, although they expect this to take place in mid August to early September. Craig said that while as a municipality, they have an obligation to be open and transparent they must also respect the confidentiality of private business, and this is a standard approach with any development or contractual arrangement.

What is included in the $3.5 million figure is 8-10,000 square feet of commercial space and an indoor atrium, which could serve as a place for indoor gatherings and events, and the town’s proportionate share of land cost.

The initial vision for a new town office had been discussed at a council strategic planning/departmental business planning retreat, with Craig saying he remembered “discussions around whether or not we should build to LEED standards in showcasing our community’s commitment to sustainability”.

Comments received from the town after deadline about the $3.5 million figure: This is tentative until the details —such as building proportions and exterior finishes —are finalized with the developer. This does not include development of the outdoor space (between the library and Civic Square building) as that is something Council wants to engage the community on. For now, it will be a parking area. The programmable elements that go on it will come at a later phase.