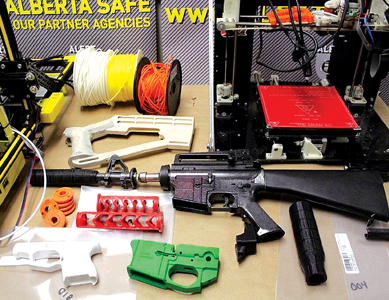 An Alberta man has been charged for allegedly 3D-printing firearm parts. ALERT believes this is the first time in Alberta that charges have been laid in relation to the 3D-printing of firearms.

The investigation came as the result of a joint initiative between ALERT Lethbridge’s organized crime team and the RCMP’s National Weapons Enforcement Support Team (NWEST). A 53-year-old man from Picture Butte, Alta. was arrested on Aug. 18.

“Make no mistake, printing 3D firearm parts is a criminal activity. Alberta’s law enforcement team will disrupt and dismantle serious and organized crime in our province, including the printing of 3D firearm parts,” said Kaycee Madu, Minister of Justice and Solicitor General. “Lawful gun owners go to great lengths to comply with provincial and federal gun laws, and our government will not allow those laws to be broken by others. I want to thank the team at ALERT for keeping pace with the use of new technologies to commit crime.”

ALERT alleges that Dan Forsyth was involved in firearm manufacturing, primarily via the use of 3D printers. A search of his home found multiple 3D printers, along with an assortment of manufactured firearm parts, including:

• an assault rifle receiver and frame;

• a bump stock for converting a semi-automatic firearm to fully automatic; and

Seized items were forwarded to the RCMP Forensic Science and Identification Services lab for examination and ballistics testing. The preliminary results confirmed the 3D-printed parts were functional and criminal charges would proceed.

Forsyth is scheduled to appear in court on Oct. 7, 2020 and is charged with the following offences:

• possession of firearms for the purpose of trafficking;

• possession of a prohibited device for the purpose of trafficking;

• unauthorized possession of a non-restricted firearm;

• unauthorized possession of a restricted firearm;

• unauthorized possession of a prohibited weapon;

• unauthorized possession of a prohibited device; and

• possession of a weapon contrary to prohibition order.

Members of the public who suspect drug or gang activity in their community can call local police, or contact Crime Stoppers at 1-800-222-TIPS (8477). Crime Stoppers is always anonymous.

ALERT was established and is funded by the Alberta Government and is a compilation of the province’s most sophisticated law enforcement resources committed to tackling serious and organized crime.