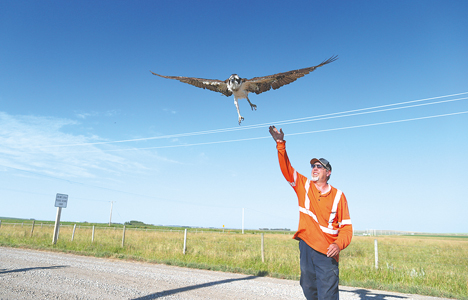 The life of another Osprey was saved, thanks to the tireless efforts by one of FortisAlberta’s powerline technicians (PLTs) who responded to a call for assistance from the Alberta Birds of Prey Centre, and a caring sharp-eyed motorist.

Over the August long weekend, Torri Peterson from Calgary was driving along a highway southeast of Pincher Creek when a large mass hanging from an Osprey nesting pole caught her attention. Curious, she approached the nest and was shocked to see what appeared to be the lifeless body of an Osprey hanging there, entangled in a large ball of baling twine. In the extreme summer heat, Torri looked closer and saw the Osprey move its head. Even though it was the Sunday of a holiday long weekend, Torri was determined to get the bird help! After making several frantic phone calls she eventually connected with Colin Weir, Managing Director at the Alberta Birds of Prey Centre in Coaldale.

Colin made a call to FortisAlberta, and not long after Ken McLeod, a PLT in Pincher Creek was onsite to lend a hand. Ken quickly made his way to the nest and immediately lowered the exhausted Osprey to the ground. Colin soon discovered the Osprey was still was not out of trouble, it’s legs were badly entangled in the massive ball of baling twine. The baling twine was likely used by the parent Osprey for nesting material.

After Colin picked up the downed bird, Ken patiently cradled it in his arms and they worked together to meticulously cut through the large mass of entangled twine. Twenty minutes later, success, the Osprey was finally free of the twine. After giving the Osprey a quick examination, and massaging its legs and feet to restore circulation, Colin determined the best course of action was to get the bird back with its parents who were circling and calling overhead. A few minutes later Ken sent the bird soaring skyward. First it landed on a nearby power pole, and a short time later returned to the nest, reunited with a sibling and parents.
FortisAlberta has been a much valued and appreciated sponsor of the Alberta Birds of Prey Centre for over ten years. Thanks to FortisAlberta’s kind support, the Centre has made many significant site improvements and seen its visitation rise to as high as 20,000 people annually, including many school children. This support has translated into increasing and enhanced contributions to wildlife conservation across Alberta. The Centre’s popular travelling bird program has also been featured at numerous FortisAlberta company events and community safety day displays alongside FortisAlberta employees.

“I am fortunate to work with FortisAlberta PLTs every summer on a number of rescue calls across the southern region. The PLTs, always a pleasure to work with, are only too pleased to lend a helping hand, both with their expertise and equipment. For us, they help make the impossible happen. In addition to keeping the power on often during extreme weather events, FortisAlberta employees have always exemplified what it is to be a superb corporate community partner and steward of the environment,” said Colin. “It doesn’t get any better than this, and the Osprey rescue and release is another example of these outstanding FortisAlberta corporate and employee values. All the FortisAlberta employees we have worked with over the years have without exception, been helpful, sincere and caring individuals to the core. It’s also reassuring for our staff and volunteers to know we have a such as steadfast community partner and friends at FortisAlberta we can rely on, always ready to land a helping hand, especially during these current challenging times.”

Thanks to FortisAlberta for all they do and the meaningful contributions you made for communities and wildlife across our province.

The Alberta Birds of Prey Centre was open daily from 9:30 to 5:00 p.m. but closed for the season on Sept. 7. The Centre receives no government operating subsidies and relies on admission fees and donations to sustain its rescue work. Every year the centre receives many calls to help injured hawks, falcons, eagles and owls from southwest Alberta.