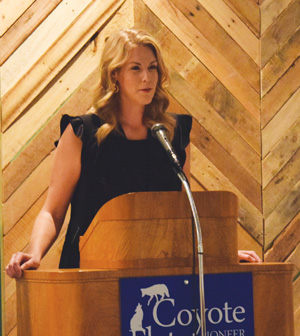 The pandemic changed things for many Canadians, including how they do stuff on Parliament Hill.

Lethbridge MP Rachael Harder hosted a Virtual Town Hall on Sept. 30, where she discussed what has been going on at Parliament during the past year and took questions in the Zoom meeting.

On March 13, Parliament was suspended as government figured out how to navigate through the COVID-19 pandemic.

“The idea was that we would suspend for a time, and then come back together once we could do so in a safe capacity,” said Harder. “As you can see, there was no rush to bring parliament back, which I actually very much disagree with. We saw parliaments across, around the world come back together, we saw provincial governments come back together in their legislatures, and they were able to do so at a safe distance, respecting one another, keeping each other safe. And so there was really no reason why parliament couldn’t do the same.

“I would argue that we have a prime minister at the helm who had no interest in bringing us back together, because if we were in the house of commons, then the opposition is allowed to ask good questions and hold him to account.”

Parliament was later resumed in a special committee, a “glorified meeting” that takes place in the chamber with a limited amount of people present. In April, MPs had voted to hold one in-person sitting per week, supplemented by additional virtual meetings, until at least May 25.

Harder said this made it hard for opposition members to hold government to account, although it did allow for members from different parties to engage in conversation.

Harder noted that government took information from the World Health organization that they should have questioned and sought second opinions over.

Additionally, despite saying masks weren’t necessary at first, government later turned around after a few months and said masks were needed. This conflict of information has led to confusion, and is something that has been raised by her constituents to her.

In June, Prime Minister Justin Trudeau announced that $912 million would be given to WE Charity foundation, a non-profit that engages and empowers youth to volunteer their communities and overseas, to run a student grant program. However, it quickly emerged that Trudeau’s mother and brother were paid to speak at WE events, and his wife was reimbursed for travel. Trudeau and then-Finance Minister Bill Morneau — who also had family ties to WE and revealed he had only just repaid WE for the cost of a 2017 trip the day of a House of Commons finance committee meeting — hadn’t recused themselves from cabinet discussions on awarding the contract.

“It would appear to be similar to money laundering — which as you know, is a criminal offence in Canada — and certainly, bare minimum, this is an ethics violation,” said Harder, who was chair of the ethics committee this summer. “Three committees here on Parliament Hill were struck and started looking into this matter, and the more we looked, the more information we found.”

On Aug. 18, Trudeau prorogued parliament, which shut down parliament and was a “big red cancellation button”, which throws out all legislation on the table and motions before committees. Harder says that to get them back on the table the next parliament session, a vote has to be taken on whether to allow them.

“Interestingly enough, the ethics committee, we were suppose to have some documents given to us the very next day, Aug. 19. And those documents were going to to show us who had spoken within the WE Charity foundation at their events, how much they had been paid and on what days they spoke,” said Harder. “We’re suspecting that these documents would have revealed quite a bit to us, and perhaps would have been quite damning to the current government.”

While it could have been a coincidence that parliament was prorogued, Harder noted it may “be a very well planned scheme to push the big red button”.

Parliament reconvened on Sept. 23, with Harder noting that Trudeau promised to come back with a plan for restoration, a new beginning and building back Canada. This plan was delivered via the throne speech, and Harder said instead of a detailed plan and vision of safety amidst the pandemic, economic recovery and reunifying the county, there was a lot of “regurgitated promises” that was repackaged and presented as new.

“We heard instead a lot of fluff, in my opinion, maybe a few rainbows, and promises of unicorns.”

Harder described the throne speech as disappointing. Additionally, the throne speech contained a lot of spending, but she questioned where the money would be coming from. Noting that Trudeau went on air and said he didn’t want people to take on debt that government could better shoulder, Harder said that government did not have a “magical pot of money” to draw from and give out like a “generous Santa Claus”.

“The only money the government has is yours, and they simply recycle it back out to Canadians. And so if you’re not the ones that are paying for that distribution of money, it means that it’s debt being incurred that will eventually have to be paid back by children or grandchildren of ours.”

The alternative is higher taxes or cutting programs and essential services. Harder suggested that the throne speech, as it didn’t lay out a vision, was meant to distract Canadians from the WE scandal and draw attention to something new.

Moving forward, Harder said her and her conservative colleagues goals are to ensure the health and safety of Canadians, getting the economy back on track and unifying the country from coast to coast.

Harder said that the Conservatives will be voting against the throne speech. However, the NDP have since come out in favour of the throne speech, so it will give government enough numbers to survive the corresponding vote and not trigger an election. While one is avoided for now, Harder speculated that one likely won’t be called this fall or next spring.

Currently, parliament is sitting in a hybrid model, with a limited number MPs in the house and others meeting virtually, allowing everyone to participate in the functions in the house. Social distancing and mask use have to be observed. Committee meetings will resume sitting the week of Oct. 5, including the ethics committee, which will be the first to meet.

The new Conservative leader was elected on Aug. 23, Erin O’Toole, who Harder called “a wonderful colleague of mine” and she looked forward to working under his leadership and the vision he will put forward.