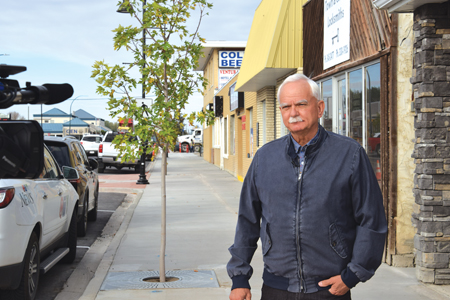 More than 300 letters have been sent to Coaldale town council regarding an Municipal Inspection.

Local group Citizens for a Better Coaldale had set up form letters, which could be edited, that residents could submit to town council through actionnetwork.org, an online messaging platform, requesting them to move forward with a municipal inspection. According to CfaBC member Jack Van Rijn, at the cutoff date for submissions to council on Tuesday, Oct. 6, more than 300 letters had been sent. CfaBC has also heard from seven additional past members of council and mayors who expressed support for a municipal inspection.

“For me, at it’s core, a municipal inspection is nothing more than an independent performance evaluation, with extensive public participation and providing multiple benefits. For me, it’s no different than an exercise that many businesses go through for self-improvement goals” said Van Rijn. “We’re not picking on any council members, the municipal inspection is to look at the entire organization at a whole, what we can do better.”

Citing the site A selection for the new high school/rec centre without resident input which the town’s recent Town Plan survey showed people were against, and the lack of transparency around the Civic Square project, Van Rijn said it was wrong for council and administration to decide what’s best for it’s citizens without even consulting them.

Van Rijn called accusations of political aspirations by anyone in the group “ridiculous”, stating they are trying to bring things forward for people who might be afraid to speak up, whether they be residents, business owners or past or current employees.

Timing had been another issue brought up at the Sept. 28 council meeting, as if a municipal inspection went froward, it would likely be completed after the next municipal election in 2021. Van Rijn stressed that it was more to do with examining the organization as a whole rather then the current council.

“It’s not about the current council. It’s about the organization as a whole. It’s just like a business, where employees come and go, but at the end of the day, you’re trying to make the business run the best it can, and this is an opportunity for an independent consultant to come down and peel layer by layer through the whole organization,” said Van Rijn. “Municipal Affairs said they would come and do a mini-inspection within six months, and then from there they can see to what depth they would have to go with the inspection.”

Concerns with the town are also being raised by Coaldale resident and former town employee Kris Mikado, who felt compelled to speak out after viewing the Sept. 28 council meeting and hearing council’s comments regarding a municipal inspection. He made a video outlining his concerns and sent a letter to council.

“I would just like some transparency and accountability of council and the administration, because a lot of these issues had been going on for the past decade, since I started,” said Mikado. “A lot of this has been pushed under the rug, and it’s not right, it’s morally wrong.”

Mikado had started working for the town in 2011 under the title of Building Maintenance Assistant, and worked there until he was let go earlier this year. While he felt pride in taking care of the town he grew up in, he claims that throughout that time it maintained the same toxic workplace environment.

He also noted that during his time there, he had seen an alarming amount of employee turnover, and raised concern with a loss of in-house knowledge. Mikado had previously raised these concerns in April, after his termination was finalized, in a Facebook post, where he stated the reason for his dismissal was “restructuring”.

As of last Wednesday, CfaBC says they have heard from 22 past employees alleging similar concerns. Mikado said he was happy other employees had voiced concerns, noting he had spoken to others in the past but they were scared to speak out for fear of retribution from the town.

“I think there’s a lot of solidity there, in the fact that somebody can actually have the courage to come forward, maybe it would be okay for them too,” said Mikado. “It comes down to a lot of people are intimidate by the town, and they have every right to be, because they have gone through a lot worst stuff than I have gone through.”

Mikado said that employees had been trying to raise these issues up for a long time, and in 2012 had sent letters to council about it, although it didn’t go anywhere at the time. Minutes available for past Coaldale town council meetings on the town’s website date back to Jan. 12, 2015.

Mikado voiced support for a municipal inspection, citing concerns over bullying and harassment at the town, transparency and accountability.

“We feel there’s a lot of unnecessary secrets and things like that. It would just be a good way to clear the air. If they have nothing going on, and everything’s truthful, and everything is all great on their end, I mean really, this shouldn’t be a big deal. The town, they have their concerns and they want to know what’s going on with the future of their town, but right now, the town isn’t providing those answers. So I just think, from an independent source, a municipal inspection would just help answer those questions and get Coaldale on track. That’s really the main reason.”

Coaldale Mayor Kim Craig said he better communicate the will of council on the matter after the Oct. 13 council meeting.

Discussion for the municipal inspection request is expected to continue at council’s regular Oct. 13 meeting.