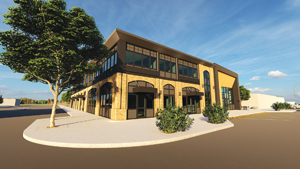 Graphic submitted by the Town of Coaldale

The Town of Coaldale is excited to announce that Shift Real Estate Investments LP (“Shift”) has officially signed on to undertake the long anticipated multi-use commercial office space on Coaldale’s newly revitalized Main Street. This project, known as “Civic Square,” was first presented to the community as part of the 2019-2021 Capital Budget that was developed and approved by Town Council in the fall of 2018. Shift was selected following a competitive Request for Expression of Interest process for their expertise and experience developing significant real estate projects throughout Southern Alberta, which will help to ensure the Civic Square project meets the functional, financial, and revitalization targets set out by the Town of Coaldale.

“When considering different locations for potential investment opportunities, we look for communities that have a strong track record of growth, low commercial mill rates, and a commitment to future growth and innovation,” said Chet Oberkirsch, Managing Director of Shift Real Estate Investments LP. “Coaldale exceeds our expectations in all these categories and we are thrilled to be moving forward with this innovative project within their downtown core.”

On track to break ground in spring 2021, the Civic Square project will be broken down into multiple phases bringing significant private investment to the community over the next couple of years. Phase One of the project will see the construction of a new two-story commercial office building on Coaldale’s Main Street featuring the following components:

• The Town of Coaldale will relocate its municipal office into spaces on the first and second floor, which will be purchased and owned by the Town for an estimated cost of $3,567,388;

• An open atrium on the main level of the commercial office complex that will facilitate opportunities for public and private events capable of holding 260 occupants seated at round tables – which will be purchased and owned by the Town for an estimated cost of $1,182,612; and

When Phase One (1) is complete, the Town of Coaldale will own the administrative office space on the second floor as well as the atrium and Council Chambers located on the main level. Shift Investments will retain ownership of the remainder of the main level commercial space.

Phase Two (2) of the project allows for further development of up to 10,000 square feet of additional commercial space along Coaldale’s Main Street. The land for Phase Two will be purchased by Shift from the Town and will be built entirely through private investment.

“The Town has been well positioned to strategically acquire the land required for the project site from a number of different property owners over time,” said Mayor Kim Craig. “This allowed for the consolidation of the space into a single developable piece, making it more conducive and attractive for outside investment.” Oberkirsch notes, “it was the Town’s ability to consolidate the space that made this major investment into Coaldale’s downtown commercially attractive. The consolidation of the lots allows for a project of a certain commercial mass, something that wouldn’t have been possible without the Town’s involvement.”

Phase Three (3) of the project will see the development of outdoor space between the Coaldale Public Library and the new civic building. Programming and design for this space will be determined through future public engagement opportunities. “The outdoor plaza will be redeveloped to function as a central community gathering space by serving as a hub for festivals, markets, and other community events while also providing parking for Coaldale’s expanding downtown,” said Mayor Craig. “Because the plaza will be owned by the Town, we have the opportunity to expand on the already exceptional community programming offered in Coaldale to attract more visitors to the downtown core.”

Shift Investments has provided a financial contribution of $75,000 towards the development of the outdoor plaza as a gesture of support for the community’s continued revitalization efforts in the downtown core. “The Davis family and Automotive Group have always supported the communities that we have businesses in,” said Mike Davis, President of Shift Real Estate Investments LP. “That same spirit of giving continues on through Shift Real Estate Investments and we are happy to provide $75,000 towards the development of the outdoor community space which will serve as an important amenity and further encourage the redevelopment of downtown.

Another important element to this phase of the project is a key parcel of land that was generously donated by the Yip family, former longstanding residents of Coaldale, to facilitate the creation of an open-air connection between Coaldale’s Main Street and the outdoor gathering space next to the library – an outdoor greenspace that will pay tribute to the legacy of their late parents. “The Town is grateful for the generous donation and vision from the Yip family,” said Craig. “The outdoor connection that the family has been

instrumental in facilitating will not only honor and preserve a key piece of Coaldale’s history, but will help cultivate connectivity on Main Street which will have positive spinoffs for local businesses.”

To complete the Civic Square project, Council endorsed the public-private partnership model in December 2019, reducing the Town’s original project overhead cost of $8,630,000 to $5,830,000. Details on the expenses and revenue breakdown can be found on the Town of Coaldale’s website at coaldale.ca/CivicSquare.

Phase One and Two of the Civic Square project will provide up to $8 million dollars of total investment in downtown Coaldale, including approximately $3.5 million dollars in external private investment. This will result in additional jobs and commercial tax assessment and will stimulate additional growth and development in Coaldale’s downtown core. The Civic Square project is fully funded and will not require tax increases to support it.

“Civic Square is the first new commercial office building on Coaldale’s Main Street in many years. It will not only bring new jobs to the community but will create additional and ongoing tax revenue for many years to come,” said Mayor Craig. “Civic Square will serve as a beacon for generating economic momentum and stimulating growth and private investment in Coaldale; we expect the Town’s innovative approach to the project to be a benchmark for similar projects in other municipalities moving forward.”