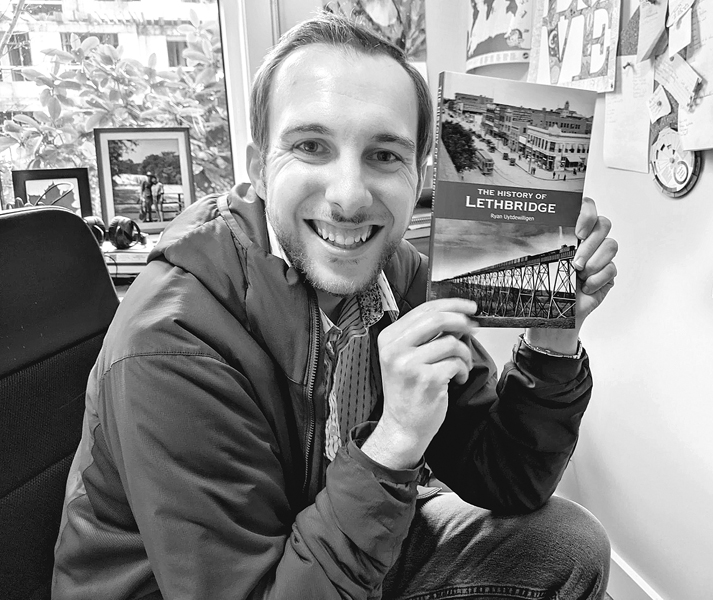 As a child, Ryan Uytdewilligen dreamed of having his own book store right in Lethbridge. It even had a name.

Ultimately, that didn’t happen, but although the author, who originally hails from Coaldale, wasn’t able to bring a book store to Lethbridge, Uytdewilligen has instead penned a book about the city instead.

Just before Christmas, Uytdewilligen released “The History Of Lethbridge,” his self-published book consisting of 192 pages and roughly 40 photographs from yesteryear, exploring the city’s history from Fort Whoop-Up days until now.

What started as an intent to write about one decade quickly transpired into an entire Lethbridge history.

“It was my interest in the 1960s,” said Uytdewilligen, who now resides in Langley, B.C. — where he works at a newspaper. “It was going to be the size of a pamphlet, because there wasn’t too much I could find. I decided to expand it. I’m partial to the 1940s through 1970s era, the baby boomer era.

“I did a lot of research and loved doing that. But I couldn’t find a home for it at that stage. I did find a publisher who published theories of Alberta history books on different communities. They said they would publish it if I expanded it and told the whole encompassing history.”

So in 2017, Uytdewilligen rolled up his sleeves and went to work telling Lethbridge’s story.

“I basically spent most of that year researching and compiling all the information I needed and telling it from the dinosaur era, essentially, to present day.”

Since its release in December, “The History Of Lethbridge” has been flying off the proverbial shelf with scores of southern Alberta residents snapping up the book through Uytdewilligen’s e-mail, Facebook pages and his direct number.

However, it won’t be sold through that childhood store Uytdewilligen dreamed of.

“I must have been six or seven and I wanted to have my own bookstore called Pages and Pages, which sold only my books. I had floor plans drawn out and everything,” he said.

There may be no book store to speak of, but that hasn’t stopped Uytdewilligen from becoming a multi-published author of fiction novels, non-fiction film and numerous film scripts.

“I’ve published five books now and I have three more on the way that will be out through different publishers this year,” said Uytdewilligen, whose novella “The Cattle Driver” won the 2019 Will Rogers Medallion for Best Western Short Fiction. “It’s been a life-long journey I have not wavered from.”

Delving into the writing of “The History Of Lethbridge,” Uytdewilligen got a history lesson of his own about the Wild West vibe of the city in those early years.

“The grittiness and the wildness of the city you just don’t think of it being, at least I never did, as it is now” said Uytdewilligen.

“But I was surprised at the prostitution history. It was into the 1940s when they finally outlawed it, but there was a special area where the Lethbridge Lodge is referred to as The Point. That’s where a whole bunch of houses and hotels where people could go. The Red Light District is what it was referred to.

“There were a lot of saloons and bars and at that time there were all the coal miners who were coming through town.”

During the Second World War, soldiers were also coming through to be trained.

“So it was a very rough-and-tumble place to be,” said Uytdewilligen. “That’s what always surprised me. It started out that way, too. It’s why people came to the area, American outlaws looking to sell their whisky and that’s what started Lethbridge, essentially.”

Released at Christmas, the first pressings of “The History Of Lethbridge” sold out and the second pressings are going equally fast.

“I had a couple of hundred books,” said Uytdewilligen. “I’ve printed about 300 more, which will be coming this month and I’m almost halfway sold out of that. So I have more coming, too.

“At the end of the month I’ll have them back on my doorstep and I’ll be able to start slinging them out through the mail. I think the next batch will be coming at the end of February. I should have enough to tide me over. But the response has been crazy.”

The release of the book also took on a personal angle for Uytdewilligen, who dedicated the release of “The History Of Lethbridge” to his mother, Kim, who passed away from cancer 11 years ago.

“I decided I was going to donate five dollars from each book sale until (the) New Year and I thought a couple of people will buy a book,” said Uytdewilligen, who also dedicated the book to his grandparents, Keith and Leona Dalgleish. “People were throwing in-addition donations, so I was able to raise about $350 for the Cancer Society and I hope to do that again.”

Still enjoying the reception to his book, Uytdewilligen has a few more literary irons in the fire.

“I have a kids’book coming out, it’s a picture book about different story-telling genres,” he said.

“I have a history book about the world’s worst John Wayne movie called ‘The Conquerer,’which was filmed on a nuclear test site and everyone dies and another novel.”

In the meantime, Uytdewilligen works his day job at the Langley Advance Times.

“I’m very busy and at the end of each day I package books up and send them out through the mail,” he said. “That’s how my days have been every day for the last few months and it’s only going to increase.”

Uytdewilligen normally returns to Lethbridge three or four times a year, but the COVID-19 pandemic has kept him away this past year.

“The longest I’ve ever been away,” he said.

Fortunately, “The History Of Lethbridge” has kept Uytdewilligen in touch with his home roots, even if he can’t get back for the time being.

“The best thing about it beyond getting re-acquainted with people is even people I don’t know have said once they’ve flipped through it, it has brought back so many memories or they’ll tell of a picture they saw and tell me another story,” he said.

“I think the feedback has been great and exactly what I wanted it to do. I’ve already had people read the book and order several more for friends and family.”

To order a copy of “The History Of Lethbridge,” e-mail ryan.uytdewilligen@yahoo.ca or contact him on Facebook at Ryan Uytdewilligen Author. He can also be reached at (604) 365-7606. Books are $25 each plus shipping.