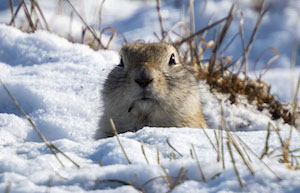 Across the U.S. and in Canada, there are many official celebratory mascots, both alive and representative of a community. In Pennsylvania, there’s Punxsutawney Phil. In Bruce County, Ontario there’s Wiarton Willie. And in Alberta, there’s Balzac Billy.

Balzac Billy is the “prairie prognosticator” – he predicts weather according to present indications or signs. Balzac area residents, consisting primarily of farmers, have always depended on Billy’s weather predictions for the upcoming growing season. Billy is a gopher – however, that’s his common name. He’s really a Richardson Ground Squirrel – a common species in Alberta. Billy and his family hibernate from September to February. Balzac is a hamlet located 24 kilometres north of Calgary.

“This has been going on since the 1970s, doing Balzac Billy. We officially started the event 18 years ago. We definitely didn’t want to stop the tradition. We wanted to keep it going. We decided to take our event from an inperson event to a virtual event. We’re going to have a live stream with Balzac Billy,” noted Sheena Haffner from Blue Grass Nursery and the Balzac Business Community Association. “We usually do a big breakfast and a band. We won’t be able to do that.”

Haffner said the idea is to invite people to log-in via the BBCA’s Facebook or Instagram page. “They can watch there. There’s actually an online colouring contest available for kids. You can participate from anywhere.”

“This is something we like to do for our community,” said Haffner, adding the event goes live Feb. 2.

“We’ll be talking a bit about Balzac Billy that morning and then right at sunrise at 8:10 a.m. Balzac Billy will come out of his burrow we built for him and he will tell us if he sees his shadow or not.”

Everyone needs a little bit of fun this time of year, said Haffner. “Everyone loves Christmas and then you have the New Year and January and February are kind of the blah months. We all need something to look forward to. It’s just for fun and that’s what’s so wonderful about the event. There’s no other reason to have this event, but to have fun.” And people love it. “We have a really successful event every year. People love coming together.”

According to Haffner, the event creates another sense of community when people come together. “Especially right now. People love coming together to celebrate something. Online, it’s going to be the same.”

Last year, over 250 people attended the in-person event. With the online virtual event, the invite is extended to everyone, anywhere. “We’d like everyone to log-in from everywhere,” noted Haffner.