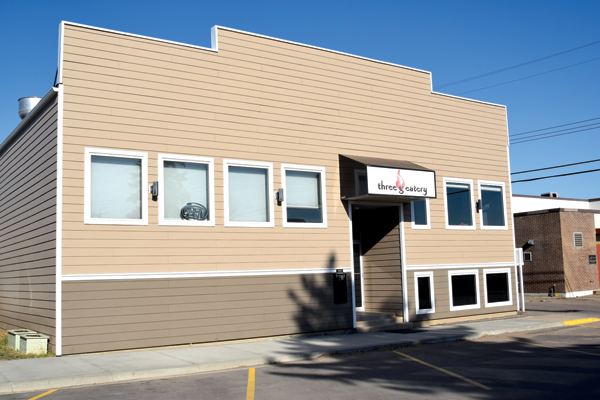 By Nikki Jamieson The 3G Eatery building was recently rezoned to allow for the use of a cannabis retail store.

Coaldale town council has approved a rezoning bylaw – which would allow for the first cannabis retail store in town.

A Public Hearing for rezoning Bylaw 805-P-03-21 was held during Coaldale town council’s regular April 12 meeting. The bylaw would allow for the rezoning of lands legally described as Plan 6476AA Block 9 Lot 1 from Commercial (C-1) to Direct Control (DC) district.

“Council should keep in mind, over and beyond any municipal regulations, there are substantial rules in place governing these types of operations, which are mandated by the provincial government,” said Cam Mills, manager of Economic and Community Development for the town. “The applicant, as an owner of multiple locations, is quite aware of these requirements.”

The bylaw contains the same requirement as a C-1 zoning, but with the addition of cannabis retail sales. This way, if the use is in place, but there’s a shift or partial shift, a rezoning bylaw is not necessarily required. Mills said it was written that way because it was simpler and less costly for the business owner, more efficient for town staff and less costly to the town. It also allows for town staff to make a determination on the development permit for the application as, “the use has fundamentally been approved at rezoning.”

“This is about being cheaper and faster and more efficient, than requiring a presentation to council covering what is largely the same issue we’re talking about here.”

Representatives from Bud Supply Group gave a presentation during the Public Hearing, and spoke on their other locations, security, aesthetics and locality of the business. Coun. Bill Chapman asked if the location would keep the restaurant equipment there, so a restaurant could operate there as well or would it be “100 per cent Bud Supply,” or if the location would require a separate entrance.

Mayor Kim Craig noted the law states there would need to be separate entrances if another business operated in that space. Chase Bennett, CEO of Bud Supply Group, said they were given the option of using the entire space, but were most likely going to keep it separated.

“If we can have another business in there, especially on something that might help traffic coming into our store, we would gladly take that on for sure,” said Bennett. Coun. Brianne Simpson, noting the business operators had said they’ve worked with police in communities they’re in, asked if they had seen any issues that have seemed to stick around their stores long-term and, especially in their Lethbridge stores – if they knew the percentage of Coaldale residents visiting their stores. Bennett said working with police was mainly about helping them out or if they had an issue in the store, such as police wondering if they’ve seen people, with Bennett noting they have a membership program with their company and video recording.

“The type of video we have to have through the provincial government, it has to be high definition, we have to have significant amount of recording, we actually signed up with our own company to do a, pretty much, forever recording on a cloud, so it’s always something we have in stores, as well,” said Bennett. “We never really see anyone coming in with lingering issues. We’ve actually phoned the RCMP or city police when people have been booting for other people, it’s just the same way as liquor. We are tied to that info, so like the fines are very, very steep with the AGLC, and in as well, it’s just the stringent requirements. Everything is on camera. If there’s a power outage, we’ve got to record it.

“We really haven’t had any lingering issues. There’s been a couple of our locations where we do have parking concerns, just because of where we’re situated, but in Coaldale that is not a concern whatsoever.”

He said customers also have a tendency to spend only five to 10 minutes in the store at a time.

Blaine Emelson, CCO for the group, noted it was mainly “other things around the location.”

“Police officers are, you know, inspectors in the AGLC world, so we have to basically treat them as such, so they have full access to walk through the building, to view all of our camera recordings, and we just feel like the more we can co-operate, the better it’s going to be for everybody, including the industry,” said Emelson.

Emelson also noted, as there is no cannabis retail store currently in Coaldale – by default, those customers are spending their money elsewhere.

Property owners Shauna and Walter Gomez, who run 3G Eatery, the restaurant currently at the location, said the ongoing pandemic has been hard on restaurants – an already hard industry – and families, making the past year especially difficult for them. They had talked about this for a while, eventually talking to Mills and being introduced to Bennett, and said this has been a huge blessing for them. Noting they had offered Bud Supply Group the use of the entire building, which they declined, Shauna said it gave them the option to, if they decide not to stay right now, come back and re-open at a later date.

“For us, this is an opportunity for us to take some time to get our feet under us and regroup as a family, regroup as a business,” said Shauna.

As of April 1, 11 written responses were received by the town.

According to guestbook entries in the agenda, the most current being April 8, 16 people sent in feedback, with all but two in support of the business. Two new letters were also included in the agenda package sent after first reading, with one requesting they limit cannabis stores by population and another from Pincher Creek RCMP saying they have not had any complaints or seen increased usage after a store was set up in their community.

After the agenda was made, the town had received two additional letters in regards to the bylaw. The first was from a town resident who had e-mailed Mills with questions regarding who owned the building, council support and the adverse effects of cannabis. The resident had also replied to the online feedback, and e-mailed Mills back asking about the rezoning criteria and stating their opposition to cannabis, saying the town should not blindly accept the legalization, but it was all about money.

The second letter was signed by five practitioners at the Campbell Clinic, who were concerned about some waivements in the bylaw. They were not challenging the decriminalization or the role of medical marijuana, but were against the location.

No one was present at the Public Hearing to speak against the bylaw.

After the Public Hearing closed, Coun. Doreen Lloyd expressed disappointment about the restaurant closing, and said they should take the comments from Campbell Clinic very seriously and she would be voting against the bylaw. Mills, noting he didn’t get the opportunity to speak with them, said the majority of their concerns had to do with the store’s location relative to the clinic, and they had based the application on downtown being the preferred location for cannabis retail compared to other parts of town, based on the assumption they can’t say “no” to everywhere in town.

“The only locations that fit the regulations that are in place are in fact directly adjacent to the Campbell Clinic, substantially closer than where this application is,” said Mills. “If council’s decision is to vote no on the basis of the proximity to the Campbell Clinic, I would say the difficulty comes with – we can have an application in two weeks time that is substantially closer, but that also meets the separation distance requirements that is also on Main Street and all the rest of that.”

Chapman asked, as there was still restaurant equipment there, if it could go back to being a restaurant in the future. Mills said he didn’t wanted to speak on behalf of the owners. The position the owners have taken is, regardless of council’s decision, there is “really no guarantee 3G continues to exist” moving forward.

“This is not a decision to keep 3G or replace it, it is simply a decision on is this appropriate in this location,” said Mills.

With respect to the applicant, the building has a bilevel layout, and the store has an interest in the main area and the lower level, and the kitchen can be walled off from that area, and there is also a separate entrance for the kitchen in the building. The kitchen area can be converted into an area with a little bar for seating, although there would need to be a separate bathroom for that space added, but there is an opportunity for someone to use that space.