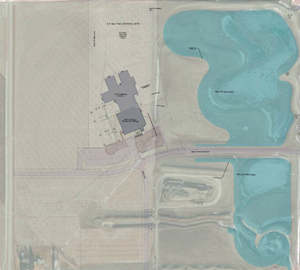 A bylaw to rezone lands to allow for a slight adjustment of the proposed rec centre and school site in Coaldale was approved. A Public Hearing for the rezoning bylaw was held during Coaldale town council’s regular May 10 meeting.

The Rezoning Bylaw 809-P-04-21 would re-designate a large portion of the lands legally described as Legal Subdivisions 4 and 5 within the SW 15-9-20 W4M, from their current zoning of Urban Reserve (UR), to Institutional/Recreational (I/R). The land makes up part of the town’s proposed Multi-Use Recreation Centre site, in addition to being the site for the recently funded replacement high school in town.

First reading of the bylaw was performed at council’s April 12 meeting. The current zonings of the properties were put in place after the 2018 annexation, with the east half being I/R and the majority of the west half being UR. The site of the joint rec centre and school was originally meant to go in the southwest corner of the east half of the quarter section.

However, it is now proposed the site would go on the north side of the quarter section near the centre, with the majority of it being in the west half.

In October 2020, during a project update with FWBA and town staff, the shift was presented, with reasons for the shift being visual connections to the wetlands, school learning opportunities, site master planning benefits and better options for future expansion.

However, in order for it to go there, the other part of the property must be rezoned, as while the rec centre can go in a UR district, a school cannot.

Two comments were received on the letsconnectcoaldale.ca platform: one on the rezoning process with the claim it was only advertised on social media, and another on the extension of 16 Avenue and whether it was previously planned or is now just included in the project due to the change to the build site on that quarter.

Spencer Croil, director of Planning and Community Development for the town, said he believed the social media comment from the first comment was a “misunderstanding,” as the town had advertised the Public Hearing for two weeks in the Sunny South News and mailed a notice of the Public Hearing to surrounding properties, as required for land-use re-designation proceedings.

In regards to the latter comment on the 16 Avenue extension, Croil said it had been “envisioned” in town documents since 2007. While the extension and a road network in this area have been “on the books” for some time, it is just being actioned now – due to “actual development processes that are occurring.”

When asked by Coun. Roger Hohm if there was a technical reason for moving the site or if it was “better sense,” Croil called his description of the shift “accurate.”

“There’s no concern of flooding or subsistence or any subsurface issues with the previous site,” said Croil.

Based on the imagery shared, Croil added, council can view the area to the north and west where the school and rec centre are going to be located now, “certainly does offer better opportunity for more cohesive expansion and master planning around that site.”

“In addition to the connections to the wetlands themselves. But there was never a concern with any particular feature of the previous site.”