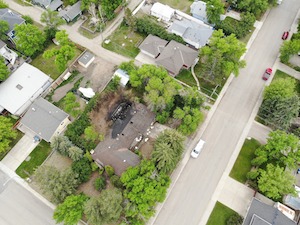 Coaldale and District Emergency Services (CDES) responded to a structure fire at 1511 21 Avenue June 5 at 2:59 p.m. – according to a recent media release. When the fire department arrived, the house’s rear deck was fully involved and the fire was extending into the home and roof. The fire was also spreading to nearby bushes threatening the home next door.

Firefighters were able to knock the fire down quickly on the deck and protect the adjacent house. In total, 14 firefighters attended the scene and worked to extinguish the fire completely. The fire-damaged home has been a known problem house for years in the neighbourhood. Coaldale Municipal Enforcement and the RCMP had worked recently to evict illegal residents and secure the property. The damage has been estimated to be $100,000.

The cause of the fire is under investigation and is being considered suspicious. CDES is reaching out to the public – who may have been in the area before the fire between 2:30 p.m. and 2:50 p.m. that may have witnessed anyone fleeing the area. Also, investigators are looking for residents that may have pictures, video, or security camera footage from the area. Witnesses can contact CDES by phone at 403-345-1331 or e-mail firechief@coaldale.ca. CDES would like to encourage parents to discuss the dangers of playing with fire with their children and teenagers and the hazards of visiting abandoned structures. CDES has responded to two confirmed youth-set structure fires in the last 18 months