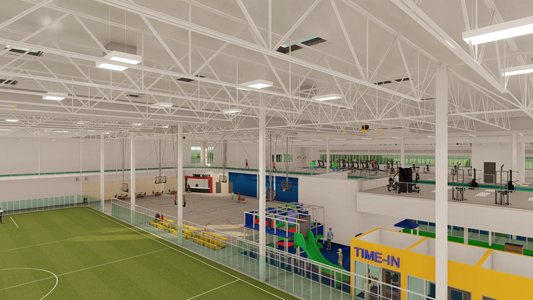 The Town of Coaldale is thrilled to announce Perry Family Farm as the first donor to the Coaldale STRONG! capital campaign.

Coaldale STRONG! is a capital campaign to generate philanthropic support that will help ensure Coaldale’s brand-new multi-use recreation centre is fully stocked with the equipment required to facilitate full programming upon opening in 2023. Perry Farm has generously donated $111,000 to help fund sport and recreation equipment in the facility.

“We’re so thrilled to be able to invest into Coaldale’s new recreation centre,” said Chris Perry, Owner and Manager of Perry Farm. “It’s an awesome way to put some positive energy forward and bring the facility to life so it can be everything Coaldale deserves.”

Perry Farm is family-owned Alberta business. They are progressive leaders with a vision to integrate environmental stewardship and innovative technology into agriculture and the rural Alberta landscape. Perry Family Farm owners include: Chris and Kyra Perry, Gerald and Beerta Perry, and Harold and Jill Perry.

“My siblings and I run Perry Farm together with our father,” said Perry. “Our business spans four generations of farming in southern Alberta since 1909. Having grown up in in southern Alberta, it felt right to invest into the recreation centre that will not only serve Coaldale but the region as a whole.”

The recreation centre is being built in conjunction with a new school funded by the Alberta Government that will replace Kate Andrews High School in Coaldale. Having attended Kate Andrews themselves, Perry and his family are pleased to see the province take initiative in building a new school.

“Kate Andrews was old even when my siblings and I attended, so it’s great to see the new school being built to replace it,” said Perry. “The combined school and recreation centre facility truly represents the synergy between the town, the school division, and the community.”

“It’s very special that someone who graduated from Kate Andrews and has been involved in local sports over the years is our first donor for the project,” said Russ Tanner, Director of Recreation and Community Services at the Town of Coaldale. “We’re grateful to the Perry family for generously contributing towards the success of the project.”

The Perry family is involved in recreation within community in other ways as well. Chris Perry has coached volleyball at R.I. Baker Middle School and Kate Andrews High School and runs the Panther Volleyball Club in the region.

“My family and I have all played volleyball and we’re excited about the possibility of introducing volleyball clubs and leagues in the rec centre,” said Perry. “We’re also interested in branching into some agriculture focused programming in partnership with the school to bring awareness and education to the community. The programming overall will serve both the kids and the community for a healthy lifestyle.”

“I’m excited about the role this facility will play in the overall health of Coaldale,” said Tanner. “The Perry Family’s contribution to the project will play a part in empowering Coaldale to become a hub of activity for families and community members of all ages.”