An inter-generational search for closure 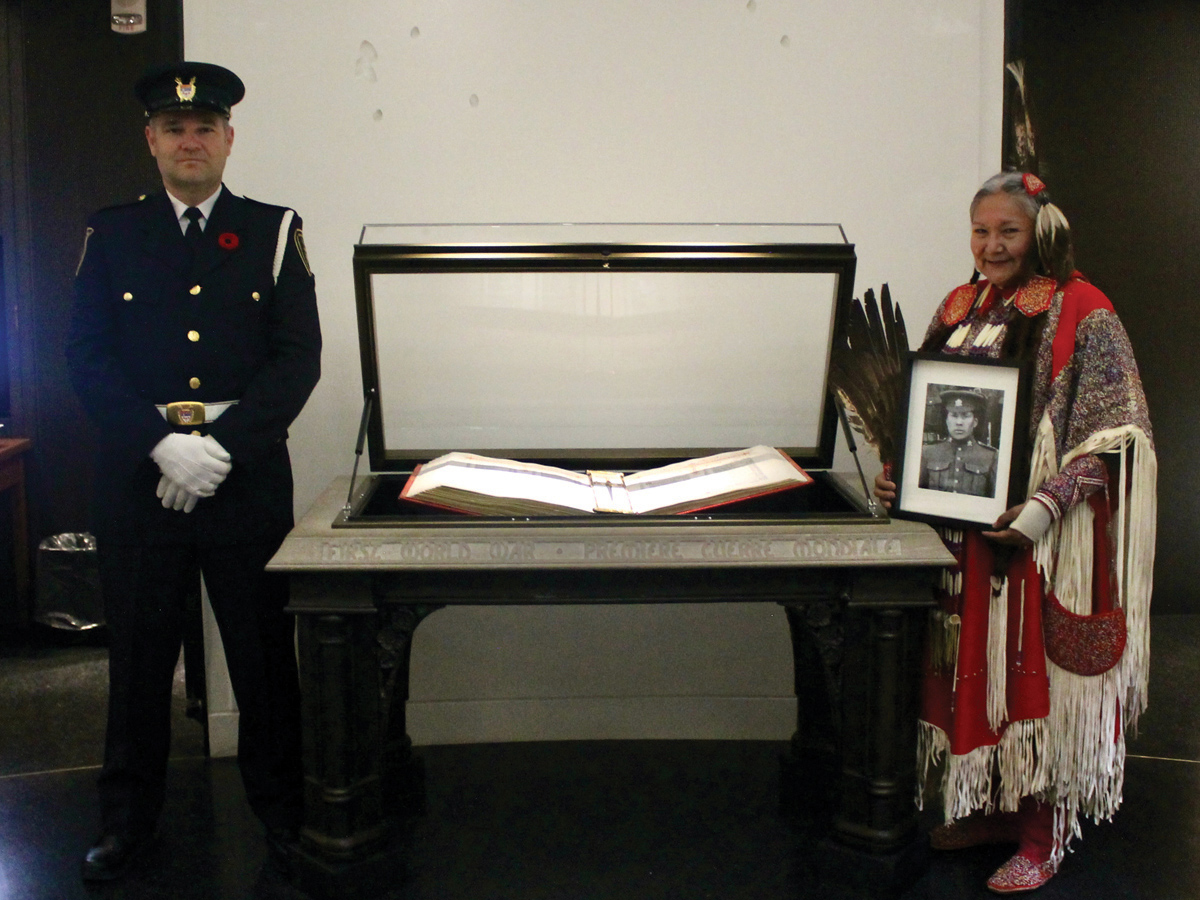 Jennifer stands in front a book of Remembrance for the First World War in Ottawa on November 11th, 2019. Photo by Joel Cross Child.

The Memorial chambers in the nation’s capital house a central altar, surrounded by seven additional altars which each contain a Book of Remembrance, which memorializes those who died in service to Canada in conflicts around the world.

A page from each of the Books of Remembrance is turned at 11 o’clock every morning everyday of the year to honour Canadian veterans who have lost their life in their service to Canada. George Coming Singer, a young man from the Blackfoot Reservation just happens to be one of the names whose page is turned on Remembrance Day each year.

Jennifer No Runner of Standoff Alberta, traveled to Ottawa in 2019, 100 years after the death of George Coming Singer, to witness the turning of his page in the Peace Tower. A unique experience in and of itself, but for No Runner, the visit was a culmination of years of emotion, uncertainty, and a desire to bring her grandfather Bob No Runner closure over the death of his brother, George Coming Singer. She continued, “I thought it was very unique to actually go and celebrate for him to see how it’s done in Ottawa.” She explains that when she was growing up her grandfather would often talk about George, “he took him [George] as a brother. George’s mom deceased when he was young. Bob No Runner’s father took his nephew George and raised him.”

Coming Singer died on January 14, 1919, as a result of an illness and an injury he endured during his service, “in his early years, when he signed up for the First World War, he had a bit of a training at Wainwright, and then he was shipped over to Europe. Then he got wounded in the leg and he was taken to a hospital, and at the time he was wounded, there was a flu outbreak. The combination of his wound and that flu outbreak contributed to his death.”

The act of witnessing the ceremony, while deeply personal for No Runner, speaks to a resilient refusal to allow George Coming Singer’s contribution to Canada to be forgotten. By witnessing the page turning ceremony, Jennifer No Runner and her nieces Niki and Joel Cross Child have the opportunity to tell the story for years to come. No Runner’s said it was important that “somebody takes the time to carry it on,” and said she was happy her nieces had the opportunity to witness the ceremony in Ottawa as well.

Local military historian Glenn Miller, who helped Jennifer and her nieces behind the scenes get clearance to observe the ceremony, echoed this sentiment. He stated his research is motivated by bridging gaps in history to ensure narratives continue beyond those who have experienced them. He said his motivation for the work he does is to safeguard these stories for future generations to hear and pass on “like a farmer, you plant a seed, and you have to wait until season for it to reap what you sow.”

No Runner’s trip to Ottawa in 2019 was preceded by decades of questions, correspondence, and uncertainty surrounding the whereabouts of George Coming Singer. It was her profound affection for her grandfather which motivated her to uncover the missing links in Coming Singer’s legacy. She explained, “it was for the love of my grandfather. My heart went out to him because there were unanswered questions that he had to live with all those 75 years, and nobody taking the time to help him, and I was the only granddaughter that took the time to be able to find the answer of where he was buried, plus he raised me.”

Jennifer No Runner was taken to Camsell Hospital, in Edmonton when she was 6 months old for the first five years if her life. When she returned home from the former tuberculosis hospital in Edmonton, her grandparents, “took me and raised me.” These deep familial connections, and duty to preserving histories are at the heart of Remembrance Day, but No Runner said trying to find answers for her grandfather, was often challenging. She said at times, trying to bring closure to her grandfather strained some of her family relationships, “I’m paying a price for this.” No Runner cited challenges that arose in trying to help get her grandfather over to England to visit Coming Singer’s Grave.

George Coming Singer is buried over seas in the Lenham Cemetery in Kent, England, and the process of locating his burial site was not a matter of a simple phone call. Speaking with a representative at Commonwealth Graves No Runner was able to, “explain to her that it was my grandfather’s wish to locate his brother.” She said, “a representative said she would try to find a solution. Three months later she got me information about George Coming Singer, where he was buried. She sent me a map of the cemetery in England.”

For most, the emotional gravity of loss weighs heavy, but the added anguish of uncertainty compounded Bob No Runner’s grief. Jennifer said, “all my life, my grandfather was always mourning him, and he felt really bad that he’s very over there (in England) by himself. He she believes that he should be with family,” where he grew up, and resting alongside family on the Blood Reserve.

No Runner explained, “we took (my grandfather) to an air show in Lethbridge, because that year, they had the First World War planes sent there. I wheeled him into the plane. He prayed he cried. Then prayed, you know, he must have been in deep thoughts of what he was experiencing.”

No Runner mentioned it was important for her to wear her regalia to the page turning ceremony in Ottawa. She said, “when I went there, I was in my regalia. I was walking around in the streets of Ottawa and was dressed in my regalia. I’m sure people just stopped. They just put their brakes right on. I mean right there and then they and they were gawking at me.”

A significant symbol of resilience considering the host of factors which posed significant challenges to indigenous soldiers and veterans. The then-legal process of enfranchisement was the most common way to sever indigenous peoples from their status. Other factors which forced indigenous people to become enfranchised were those who left reservations for extended periods of time or sought a university education. A compulsory requisite for serving in the Canadian military was voluntary enfranchisement. This effectively stripped indigenous soldiers of their cultural identity and legal indigenous status.

Indigenous veterans who survived the war returned home to reservations where they were no longer members. Indigenous veteran-pensioners were subject to additional requirements to gain access to pensions, whereas their non-indigenous counterparts were not subjected to the same processes. Despite this, it estimated between 7000 and 12000 indigenous soldiers served Canada in the First and Second World Wars, and the Korean War. Witnessing and honouring George Coming Singer is a powerful emblem of strength as the historical precedent overwhelmingly aimed to create distance in indigenous people’s cultural identities and traditions.

Locating Coming Singer’s grave was a powerful revelation for No Runner’s grandfather, “When I gave (the information) to him, he cried. He cried because of relief for him to know what he was at. I even took an atlas to show him where it was at. And then we started working on a visit.”

Unfortunately, her grandfather, Bob No Runner passed away in January of 1996, over 75 years after the passing of George Coming Singer and was not able to visit the gravesite of his brother in England.

No Runner said she was informed by a representative for Commonwealth war graves that the likelihood of having Coming Singer’s coffin returned home was unlikely, “it’s a rule, a policy, that war veterans that were buried overseas, you can’t take them home. They have to remain there.” Still, No Runner continued to ask questions, trying to find a way around another obstacle. Although the ongoing COVID-19 pandemic has limited travel plans, No Runner is not ready to give up on her grandfather’s wish to have his brother returned to rest with his family. She said speaking with Ovide Mercredi, prominent indigenous lawyer, activist, and former NDP leader in Manitoba, brought her hope. He told No Runner there is legal precedent for getting Canadian soldiers formally buried overseas home and hasn’t given up hope. “It’s happened before, maybe it can happen again. I’m still going to try in any way that I could to get his coffin taken home.”

No Runner’s journey and inter-generational search for closure for her grandfather is indicative of the essence of Remembrance Day for many. It is deeply personal, and although the First World War ended over 100 years ago, the ongoing process of closure has persisted into the new century and spanned across several generations. Hopeful, No Runner said, “I know would like to visit him sometime down the road. And if I never do fulfill this, I’ll pass it to my son.”

Indigenous Veterans Day is celebrated and acknowledged on November 8 each year.