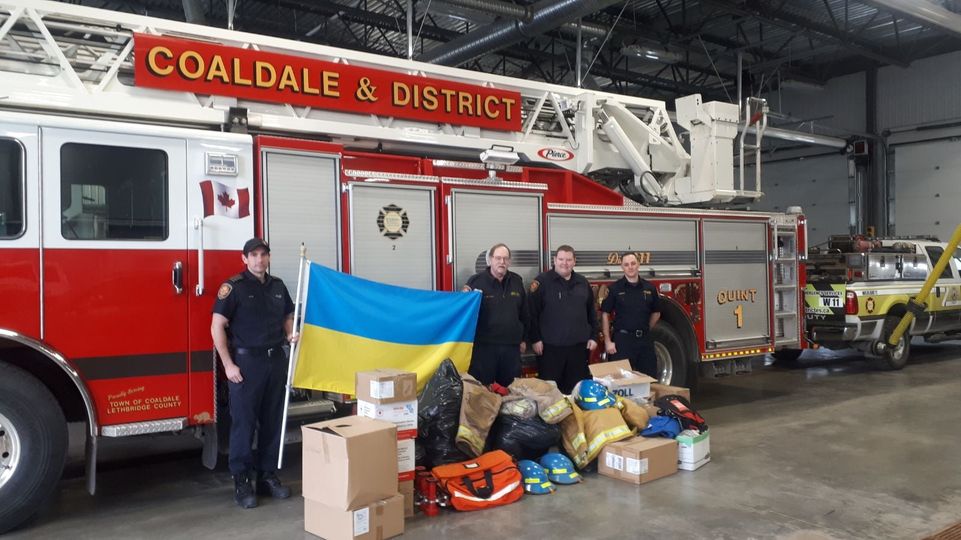 Fire departments across southern Alberta are working together to provide desperately-needed protective equipment to Ukraine.

Now retired firefighter and emergency services worker, Paul Wasylewich, of Lethbridge has been coordinating donations from fire departments in the region to aid Ukrainians during the ongoing Russian invasion. Wasylewich said after posting to Facebook, the effort to get equipment to the Polish-Ukrainian border has, “really picked up amazing momentum.”

Social media, word-of-mouth between fire departments, and increasing media coverage is pushing greater awareness of the effort. Wasylewich’s Ukrainian heritage, connecting ties to the country, and family history of public service are factors in his desire to help. He explained, “it started when the invasion started. My background is emergency services and my whole family’s in healthcare.”

Wasylewich said, “it didn’t take very long to recognize it there their hospitals and emergency services, got overwhelmed. We have a friend that’s over there on the Ukraine border at an aid camp.” The requests started coming in for trauma supplies, medications, medical supplies, and protecting gear. Wasylewich’s contact at the border reported, “hundreds of people coming (for aid) with head wounds,” due to having to sift through more unstable rubble as it falls down. Fire helmets are concussion-proof and offer valuable protection. To date, organizers and fire departments have, “sent dozens of sets of full firefighting gear, a massive load of trauma and medical supplies, and also ballistic vests.

Wasylewich said the donation efforts, “started with Magrath.” Chief Cliff Blackwell of the Magrath fire department, reached out to Wasylewich and, “said they had a fairly generous amount of equipment to donate.” Once Wasylewich began posting to Facebook, other fire departments also began offering ways to source specifically requested supplies. Wasylewich added the work going on to organize and source donations, “behind (the scenes) has been amazing. In Coaldale, chief, Kevin McKeown phoned and asked, ‘what do you need? We will see what we have.’” These donations were ready to go within hours, and Wasylewich said, there was no room left in his SUV, even to fit, “a piece of paper,” after all of the donations were loaded.

The supplies are being transported to Calgary where they are then dispersed through the Assumption of the Blessed Virgin Mary Church. He said, “when we brought up the first few loads, it was like we had brought them a million dollars.”

Although it is expensive to ship supplies internationally, the company being used to ship to Ukraine is offering a $5 per kilogram reduction in the fee to transport. Wasylewich said what would normally cost $7/kg is being shipped by the company Meest, for just $2/kg. He said, “last Saturday we just sent 15,000 kilos over, that’s $30,000,” and added cash donations will help cover this shipping cost to get the equipment to those who need it.

“I have Ukrainian heritage, so, I think now I’m more proud to be Ukrainian than ever. But, you know, it’s not about us. It’s about the Ukrainians that are tragically forced into war that are heroically fighting against it. So this is a way of wondering about my dad’s homeland, and our heritage

Wasylewich said Russian forces, “flattened an emergency services building (in Mariupol’) a few days ago. I don’t think the need will stop.”

Wasylewich said he would continue, “as long as there’s people wanting to do it. I’m certainly not gonna stop till they say, ‘stop’,” and added, “my heart is broken, but the spirit of the community keeps our spirits up.”